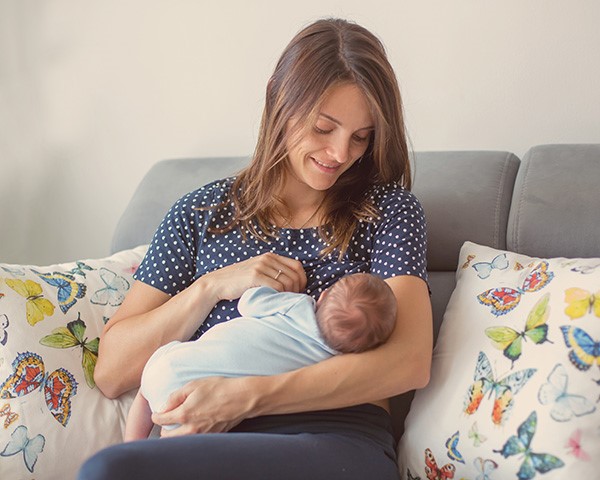 In the wake of a U.S. attempt to derail a recent international effort to encourage breastfeeding as a better option than breast milk substitutes, and looking ahead to World Breastfeeding Week (Aug. 1-7), Harvard T.H. Chan School of Public Health’s Ana Langer discusses the health benefits of breastfeeding, its low prevalence, and why there should be greater efforts to promote it.

Q: At a recent United Nations meeting, Trump administration officials tried, unsuccessfully, to water down an international resolution to promote breastfeeding and restrict the promotion of food products that might harm young children. The officials said their efforts were aimed at protecting women’s choice in providing nutrition for their babies. What’s your take on this?

A: Breastfeeding has been recognized for decades as the best way to feed infants, with evidence consistently demonstrating its health, psychological, and financial benefits. Breast milk and the experience of breastfeeding protect babies against malnutrition and infections, represent a unique mother-baby bonding opportunity, promote psychological wellbeing for both mothers and babies, and contribute to children’s cognitive development. Breastfeeding also protects the longer-term health of the child by reducing his or her risk of obesity and related conditions, such as diabetes and hypertension, and protects women against ovarian and breast cancer. Furthermore, breast milk does not require any special preparation, does not expose the baby to contaminated water, and does not involve any direct financial cost. While women—and all people—should always be able to make their own choices in matters that affect their health and wellbeing and that of their dependents, the evidence about the benefits of breastfeeding is so strong and consistent that universal consensus has been reached on some key recommendations: Babies should be put to the breast within one hour after delivery, breastfed exclusively during their first six months of life, and continue to be breastfed, complemented with solid foods, until one or two years of age.

Obviously, there are individual cases when breastfeeding might not be possible or the preferred alternative. When that is the case, mothers and others in charge of feeding the baby should learn how to prepare formula safely and how to deliver it in a way that replicates, to the extent possible, the breastfeeding experience, for example ensuring skin-to-skin and eye contact.

High-level guidelines and recommendations, like those from the World Health Organization (WHO) that the Trump administration tried to modify, are based on evidence and target the general population. They are not tailored to the rare individual cases to which they may not apply. Therefore, attempts to water down evidence-based breastfeeding recommendations are not justified and are likely to reflect the influence of the formula industry that has been instrumental in the decline of breastfeeding over the last 70 years.

Q: Are concerted efforts to advance breastfeeding needed? What is the role of World Breastfeeding Week?

A: Breastfeeding was the norm until the early 20th century, when the practice started to be associated with low class and lack of education, especially in Canada and the United States. Infant formula had become available by then and its use increased, especially after World War II. The decline of breastfeeding became widespread, including in the developing world, where babies’ feeding with breast milk substitutes introduced significant risks for their health and survival. From the 1960s forward, breastfeeding experienced a modest increase, at least in part because of WHO and UNICEF’s-sponsored initiatives aimed at supporting the practice, including the Baby-Friendly Hospital Initiative and the International Code of Marketing of Breast-milk Substitutes. But the improvements have been modest. One recent review of the situation in the developing world has shown that the prevalence of exclusive breastfeeding among infants aged less than six months between 1995 and 2010 only increased from 33% to 39%.

There are multiple factors that contribute to the low prevalence and slow increase of the practice worldwide, such as negative attitudes towards breastfeeding in public and its association with “low class” in many cultures, insufficient promotion in health systems, lack of supporting policies regarding maternity leave and opportunities to breastfeed in the workplace and, very importantly, the aggressive campaigns of the breast milk substitutes industry.

Investments and commitments to improve infant feeding practices have a critical impact on children’s lives. That is why efforts like the Worldwide Breastfeeding Week, which since 1992 has been instrumental in promoting breastfeeding, are essential.

Q: Are there certain countries or parts of the world where promoting breastfeeding is a particular challenge? What should be done to promote breastfeeding worldwide?

The report included an analysis demonstrating that an annual investment of only $4.70 per newborn would be needed to increase the global rate of exclusive breastfeeding among children under six months to 50% by 2025.

Obviously, much more than financial investments are needed to increase the prevalence of breastfeeding. It’s essential that there be coordinated, evidence-based, and sustained global and national efforts involving the public and private sectors as well as the advocacy, policy, and technical communities to ensure that breastfeeding—one of the most cost-effective and deeply humane health promotion interventions—will become the norm.