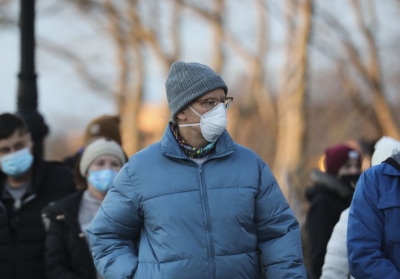 New York– Governor Kathy Hochul is scheduled to drop New York’s stringent indoor mask mandate on Wednesday, ending a requirement that businesses ask customers for proof of full vaccination or require mask wearing at all times and marking a turning point in the state’s coronavirus response.

In letting the mandate lapse, New York joins other Democrat-led states in a loosely-coordinated bid to help voters reclaim a sense of normalcy. The Governors of New Jersey, Connecticut, Delaware and Oregon have announced that they will lift school mask mandates in the coming weeks.

“The decision will eliminate a rule that prompted legal and interpersonal clashes over mask wearing, especially in conservative parts of New York,” reported The New York Times (NYT). The rule is set to expire on Thursday after months in effect, Xinhua news agency reported.

On Tuesday, the Joe Biden administration stressed it would not object to decisions by New Jersey, Connecticut, Delaware and Oregon to lift mask mandates in schools soon, noting that the Democratic-led states still allowed decisions on face coverings to be made by parents and local school districts.

White House Press Secretary, Jen Psaki said the four states permitted school districts to follow guidance from the Centers for Disease Control and Prevention (CDC), which continues to recommend universal masking in schools. The administration’s “great concern” was political leaders stopping students from wearing masks even if school districts or their parents require them to do so.

“Our goal remains continuing to ensure that there is guidance that helps school districts stay open … 98 percent of schools are open,” she added. Her remarks came as the Director of the CDC on Tuesday said, “now is not the moment” to end masking requirements, after a major teachers union called for a review of CDC guidance as cases decline.

Public health experts agree that school mask mandates should not last forever but differ on whether the time has come to remove them. “The move to loosen these politically charged restrictions has divided scientists and public health experts,” said NYT on Wednesday.

“I think it’s entirely appropriate that we start lifting school mask mandates now,” Joseph Allen, a Harvard University researcher who studies indoor environmental quality, including in schools, was quoted as saying. “We’re in a much better place than we were before, and it’s time to update our strategies to reflect the moment.”

Others noted that the virus was still exacting a significant toll on the country, with cases about as high as last winter’s peak and around 2,600 Americans dying each day.

“Lifting school mask mandates too early could jeopardise the progress that the country has made over the last few weeks,” said the report. (IANS)