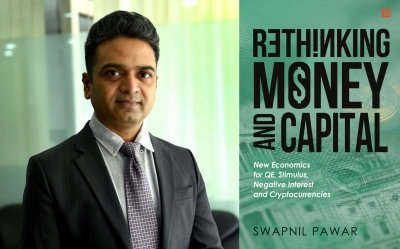 New Delhi– His first book, “Anatomy of Froth” was an investigative work with some analysis of the root causes of the global financial crisis. While it had recommendations, its primary focus was to contextualize what caused the crisis.

His latest book, “Rethinking Money and Capital”, on the other hand, is a theoretical exposition based on real-world observations. Its scope is more conceptual than empirical and aims to redefine our outlook towards money and capital.

“In a sense, ‘Anatomy of Froth’ was the foundational research for ‘Rethinking Money and Capital’, Swapnil Pawar, the Founder of Newrl, a leading public Blockchain for mainstream decentralized finance (DeFi), told IANS in an interview.

“The first book paved the way for a set of questions that could only be answered by an eight-year research project that culminated in ‘Rethinking Money and Capital’.

“It’s an interesting mix of first-principles theory and on-the-ground observations. My earlier work was more focused on root cause analysis while ‘Rethinking Money’ is focused on overhaul of the entire conceptual foundation of macroeconomic theory. In that sense, its aspiration is much bigger,” Pawar elaborated.

In the book, he contends that the fiscal deficit is not counter-productive. What is the rationale behind this argument?

“Fiscal deficits are frowned upon because of the assumption that there is a finite pool of savings available for all investments and deficits in the economy. If the government takes up a large part of this pool, the investment demand will remain unmet. This line of thinking is inconsistent with stock-flow consistent analysis of an economy,” Pawar maintained.

John Maynard Keynes had also pointed out that the savings of a given year matches the investments of that year – no matter what the interest rate or policy. Because this is an accounting identity and does not depend on behaviour of participants in the economy, he added.

“The amount of savings and investment is of course a function of the decisions made by these participants. Here, if the economy is operating below capacity (which is the norm) rather than at full capacity (which is possible but less common), the fiscal deficit actually makes up for the lack of demand from the private sector,” Pawar maintained.

“This was amply clear in the recent government response to the Covid crisis in the developed world – where fiscal stimulus funded by fiscal deficit helped reduce pain for a large multitude of common people in those economies. The Indian government unfortunately stayed mired in the mistaken theories of fiscal deficit and let the populace suffer needlessly,” he elaborated.

The observation that inflation can jump as a result of excessive stimulus is consistent with this analysis, he said, adding: “Fiscal deficits during periods of high capacity utilization are not required and will add to inflationary pressures.”

Pawar also maintains in the book that policy and economy are false dichotomies. Why does he think so?

“Economics has been mistakenly thought of as a precise science – like Physics. As such, it is assumed to be above the pushes and pulls of socio-political context. However, in truth, it is more like biology – in that it is contingent, historically driven and too complex to be summarized neatly in a few ‘laws’.

“The policy choices in economics are not about the ‘truth’ of some human-independent nature but trade-offs in who benefits and who loses (for example in the fight against inflation by creating higher unemployment). These tradeoffs are inherently political decisions and as such should be brought into the public discourse as debates rather than being handed down by ivory tower specialists – whose models, incidentally, are broken,” Pawar explained.

What are his suggestions for reinvigorating India’s economic policy?

“India’s economic policy should drop the obsession with fiscal deficit and high real interest rates. It should also use the banking sector more aggressively. The recommendations are as follows.

* Use development finance institutions created as banks to fund infrastructure development at a massive scale – while pre-emptively providing for NPAs to some extent.

* Start universal basic income – not only to improve quality of lives of the bottom half but also to opt them into the consumption economy and give a fillip to the domestic manufacturing and services sectors focused on these consumers.

* Keep real interest rates negative. Widen inflation band of tolerance to 4 per cent-10 per cent. Use nominal GDP stability as a metric to guide monetary policy instead of inflation.

How does he foresee the role of blockchain in the Indian economy?

“A lot of Indians still lack access to financial services. There has been a lot of innovation in recent years which has undoubtedly improved this state of affairs. However, a lot more needs to be done. Blockchain can improve financial inclusion in India in the following ways.

* It can enable the traditional finance companies to address the needs of the underserved because blockchain technology can improve fraud detection and counterparty assessment.

* Local communities can be empowered to run cooperatives amongst themselves for several financial needs – thus reducing the reliance on centralized and high-cost banks/insurers etc.

*Collateral of working capital, invoices etc can be tokenized for better financing.