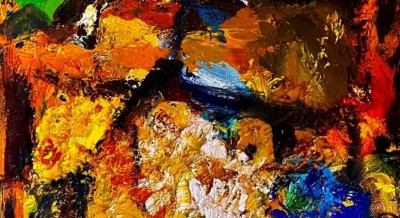 New Delhi–  Featuring the works of five Indian master artists – Jamini Roy, Sakti Burman, Krishen Khanna, Paresh Maity, and Thota Vaikuntam – the exhibition pays homage to all expressions that are beautiful and unchanging in a world of constant change, regardless of the style and genre represented by the artist. The exhibition of paintings celebrates various styles that bring out vivid expressions of human life and mind, ranging from figuration to abstraction.

All year long, India is alive with festivities and celebrations, and it is deeply rooted in cultural traditions, whether in music, literature, performing, or visual arts. Realm III, brings the vibrancy and joy of Indian visual arts through the works of artists who laid the groundwork for Indian arts.

The common thread running through the selection is playfulness, with each artist imbuing his work with joyful intent. “India’s artscape stretches back over millennia with a lexicon that has always adapted and changed but of which aesthetic considerations have remained constant. A country that loves its festivities and colours and is rooted in cultural traditions finds expression through its music, dance, literature and art,” says Tripat K Kalra, Founder-Director, Gallerie Nvya.

Canvases by Jamini Roy, one of India’s most prominent artists born in the nineteenth century, are included in the exhibition. The works on display demonstrate Kalighat’s influences on his art. The exhibition contains works that bear witness to Roy’s heralding of a new era in Indian Modern art history, with a strategic denial of its modern traces.

Paintings by veteran artist Sakti Burman, whose works inhabit ancient tales of country romances, enchanting maidens, flautists, exotic flowers, and birds, where all creatures dwell in harmony – in a state of dreamlike reality – will also be on display.

Krishen Khanna (b. 1925), another of India’s senior artists and a living Progressive Artists Group member, is also exhibiting his works at the show, in which viewers can recognise Khanna’s portrayal of himself. Sensitive in handling, he spontaneously and exuberantly transfers his observations onto the canvas, while retaining the representational element of his subject. His use of colour and expressionist brushwork elevates the everyday to the sublime. (IANS)