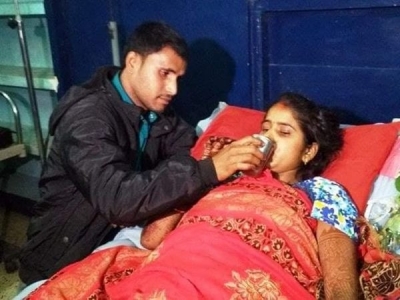 Pratapgarh, Uttar Pradesh– Life has again imitated art and this seems to be a perfect replay of the 2006 blockbuster “Vivah”.

The incident took place in the Kunda area in Pratapgarh, earlier this week, where a young girl, dressing up for her marriage, met with an accident that led to severe disability.

The bride-to-be, Aarti, was getting ready for her marriage when she tumbled down a staircase while trying to save a child. She suffered a severe spinal injury and was rushed to a private hospital in Prayagraj.

The doctors informed her family members that Aarti may have to be confined to bed for several months and may even end up disabled.

Her family members prepared themselves for the worst — they knew that the wedding would be called off.

Aarti’s father asked the groom’s family if they would now prefer to accept Aarti’s younger sister as the bride.

The groom-to-be Avadhesh then made an announcement that left his family and Aarti’s family shocked.

He said that he would marry Aarti at the designated time and would take care of her treatment.

His family tried to make him see reason but Avadhesh refused to relent.

The doctors were informed and Aarti was brought home on a stretcher for two hours and the marriage was solemnised at the designated time.

Immediately after the wedding, Aarti was taken back to the hospital.

She underwent a surgery on Wednesday and Avadhesh signed the requisite forms as her husband.

“Since the marriage, Avadhesh has not left hospital and is taking care of Aarti. The families are overwhelmed at what has happened and people are praying for the girl’s recovery,” said a family member. (IANS)