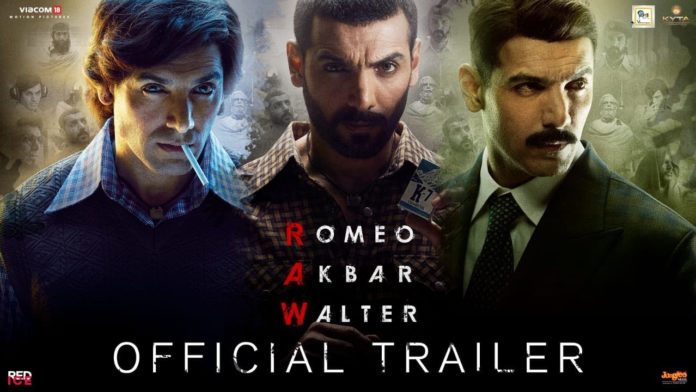 What makes them do it? No, I don’t mean the bravehearts like Meghna Gulzar and now Robby Grewal who dare to make films about those daredevils who risk their lives to act as Indian spies in Pakistan. But those unsung daredevils who sneak into Pakistan to glean information for their beloved motherland.

And what do they get for it finally?

Towards the end of this intelligently-written well-crafted espionage drama, our spy-hero’s boss, played with wizened aplomb by Jackie Shroff mumbles, “He gave preference to his motherland over his own mother.”

And just a while back John Abraham’s Romeo/Akbar/Walter had made Shroff promise, “No matter what happens, my Ammi must be looked after.”

So much for promises.

‘RAW’ hits those raw nerves that all patriotic cinema avoids. This time we go beyond the flag-waving to look at the anguished solitude of a man who has chosen to give up his normal life to infiltrate Pakistan.

John is very good at portraying a loner. His face suggests the stoicism and unspoken grief of a man who has zero expectations from life.

Which is why I found the whole angle of a love interest for John’s character highly distasteful. In the only outrageously improbable sequence of this film of urgent austerity, our spy-hero and the female diplomat who has followed him to Karachi, are shown making out in car in the middle of the most dangerous situation possible for an Indian spy in Pakistan.

It’s tragic that a film which shows such sensibleness and wisdom must still make space for the hero to coochiecoo while he gleans classified information from hardboiled Pakistani generals and arms dealer.

This is 1971 when Pakistan is about to split into two halves. The birth of Bangladesh silhouettes much of the action in RAW. And when I say “action” I don’t mean the kind of stylized fights that we expect we would expect John Abraham to undertake under the shadow of the flying flag.

The action is visceral swift and decisive. After seeing a torture scene you will never be able to listen to the beloved “Nani teri morni ko more le gayi” as a children’s song. Most of the brutality converges on the character of the Pakistani colonel played by Sikander Kher who exudes a kind of unfettered sadism that can come into play anytime. Kher plays the dangerous man with a snide swagger. He is just brilliant.

There are other very effective performances from Jackie Shroff as the RAW chief who often speaks in metaphors that are meant to hide the sheer helplessness of an organization when faced with real danger.

Rajesh Shringarpure as Shroff’s right-hand man displays the intuitive confidence of an off-field soldier while Suchitra Krishanmoorthy is interesting as a double-dealing newspaper editor.

Anil George as the powerful Pakistani arms dealer who takes the Indian spy under his wings and Alka Ameen as John Abraham’s abandoned mother, leave a lingering impact. So does Raghuveer Yadav as a Pakistani spying for India.

But this film with its tightly wound structure that tends to go loose-limbed when necessary and gets back into shape when done with the run, belongs to John Abraham. As Romeo Akbar Walter and all the aliases that an Indian spy must assume to get his way in enemy territory, John plays the misfit with instinctive empathy. He is at once the vulnerable spy and the invincible patriot.

Robby Grewal’s direction exercises a commanding but flexible hold over the material. The narrative is never in a hurry to get anywhere just to make sure it doesn’t lose the audience. The film movies at its own volition. It is crafted with care and shot by cinematographer Tapan Tushar Basu with grainy intensity. It invites us into a world of politics and betrayal.

Some of the sequences are unexpectedly heartwarming. But I wish the film could have avoided the cliched depiction of Pakistan with paper green flags strung on threads across streets. Pakistan, as we all know, is a state of mind created to infuse an unreal level of patriotism in Indians. Given that volatile situation, ‘RAW’ reveals a remarkable restrain. (IANS)