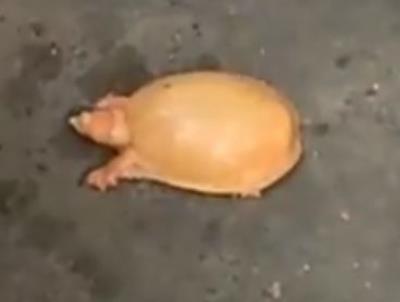 Bhubaneswar– A rare golden turtle weighing about 2.5 kg was rescued from a paddy field in Odisha’s Bhadrak district, a forest official said on Monday.

A farmer named Nirakar Mohanty spotted the turtle in his paddy field in Bentalpur village under the Chandbali block.

He brought it home and informed the forest officials, who reached the spot and rescued the rare turtle.

Subash Nayak, Chandbali Forest Range Officer, said that such golden turtles are usually found in freshwaters. It has been decided to release the turtle in the Baitarani river near Chandabali.

Earlier on July 19, a rare yellow turtle was rescued from a farm in Sujanpur village under Soro block in Balasore district. (IANS)