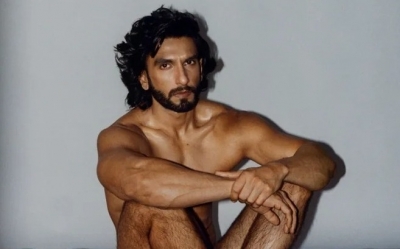 Mumbai– The Mumbai Police have booked Bollywood actor Ranveer Singh for obscenity and on other charges after his nude photos appeared in a New York-based magazine and later became viral on social media networks.

“I have filed the complaint along with my husband Abhishek Chaubey’s NGO on the issue with the Chembur police on Monday. The police have taken cognizance and registered a first information report on the NGO’s plea,” lawyer Vedika Chaube told IANS.

Among other things, the couple have contended that the photos of Singh have hurt the sensitivities and modesty of many women who are the actor’s followers on various social media networks.

Following the Chaubey couple’s written complaint, the Chembur police have lodged the FIR invoking Indian Penal Code Sections 292, 293 and 509, dealing with obscenity and actions intended to insult the modesty of a woman, plus Information Technology Act’s Section 67(A).

The complainant alleged that the actor had hurt the sentiments of women in general and insulted their modesty through his photographs.

The complainants claimed that Singh has been paid crores of rupees for his photo shoot as well as the social media at the cost of polluting the social environment and sought appropriate action against the actor. (IANS)