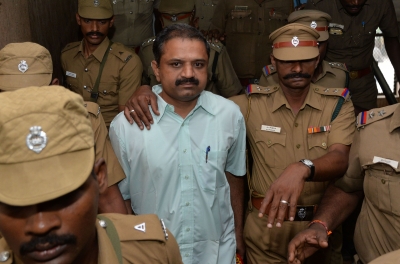 Chennai– After the Supreme Court granted bail to Perarivalan, convicted in the Rajiv Gandhi assassination case and serving a jail term since 1999, his mother Arputhammal is now planning his wedding.

The Supreme Court, amid stiff resistance from the Central Government, had granted bail to Perarivalan on March 9. A petition for remission of his life imprisonment is pending before the President of India for approval.

Arputhammal, who had been running from pillar to post to secure bail for her son, while speaking to the media in Chennai said, “My son had earlier said that he was not interested in marriage and that I was already running between prison and home and he didn’t want one more woman to go through it, but now the situation has changed and hence it will be the next step.”

Perarivalan’s mother had met Tamil Nadu Chief Minister M.K. Stalin on May 28, 2021, immediately after he assumed office, and told him that her son was suffering from bladder infection and requested 30 days’ leave for him. The leave was granted which was extended every month for another 30 days.

She told mediapersons that Perarivalan was at home for the past nine months and had undergone treatment for various ailments and was much better now.

Arputhammal added that Perarivalan was innocent and after securing bail from the Supreme Court they were expecting his acquittal in the case. The Supreme Court had upheld the death sentence of the four convicts in the Rajiv Gandhi assassination case, Murugan, Nalini, Shanthan and Perarivalan, in 1999.

While Nalini’s death sentence was commuted under Article 161 of the Constitution, the death sentences of the other three were commuted by the Supreme Court to life imprisonment in 2014.

Stalin had, after assuming office as CM, written a letter on May 20, 2021 to President Ram Nath Kovind requesting him to remit the life sentences of all the seven convicts in the Rajiv Gandhi assassination case. He also sought the release of S. Nalini, Murugan, Shanthan, AG Perarivalan, Jayakumar, Robert Payas and P. Ravichandran. (IANS)