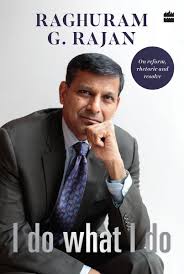 New Delhi–Former RBI Governor Raghuram Rajan bestselling book “I Do What I Do”, is now available in a paperback edition, publisher HarperCollins announced on Monday.

When Rajan took charge as RBI Governor in September 2013, the rupee was in a free fall, inflation was high, India had a large current account deficit and forex reserves were falling. As every measure failed to stabilise markets, speculators sensed a full-blown crisis.

Rajan’s response was to go all out, not just to tackle the crisis of confidence, but also to send a strong message about the strength of India’s institutions and the country’s ongoing programme of reforms. He outlined a vision that went beyond the immediate crisis to focus on long-term growth and stability, thus restoring investor confidence.

All of this was captured in “I Do What I Do”, first published in September 2017, which went on to become a bestseller.

Rajan’s commentary and speeches in “I Do What I Do” convey what it was like to be at the helm of the central bank in those turbulent but exciting times. Whether on dosanomics or on debt relief, Rajan explains economic concepts in a readily accessible way.

“It’s great to have the paperback of ‘I Do What I Do’ at a time when demonetisation, NPAs and the whole question of RBI’s role and functioning vis-à-vis the government are at the center of a storm. The hardcover sold about 100,000, and is among the highest selling for trade hardcover book last year,” Krishan Chopra, Publisher Non-Fiction and Business Books, HarperCollins India, told IANS. (IANS)