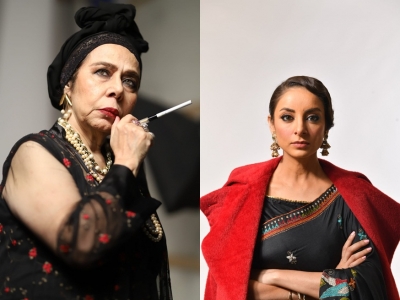 Stylised in the classic noir format, this six-episode series directed by British-Indian director Meenu Gaur tells us stories of seven women who- were pushed beyond their limits.

With stark lighting effects, an oppressive atmosphere of menace, pessimism, anxiety, fatalism, defeat, entrapment, and underlying existentialist philosophy, the stories showcase the unapologetic and unforgiving side of women, who are either driven by their past or by human weakness.

Narrated artistically and poetically, the following line in the narrative encapsulates how the plot unravels. “Faces don’t always reveal themselves Stories too are not always those which get told. Every knot of the thread contains a mystery. And, in the belly of every mystery is another story no, another secret.”

Set in Pakistan, the series begins on an eerie, atmospherically staged, and dramatically blood-curdling note, introducing us to Mai Malki (Samiya Mumtaz), the daughter of the guardian of a shrine. Accompanying her is her husband Peer Sarkar Naaji Shah’s mistress, Anarkali (Mehar Bano). The ladies are giving the final touches to a deed they have just committed. They are disposing of the remains of Peer Sarkar Naaji Shah.

Woven into Mai Malki and Anarkali’s tale are the stories of Mehek, Kanwal, Zuvi, Massey Ma, and Zehra. All the stories are familiar tales, but the way it is mounted is what keeps you hooked.

Despite their love marriage Mehek (Sarwat Gilani) is in an abusive relationship. When pushed against all odds, she decides to get rid of her husband Aftab (Osman Khalid Butt) only to realise that the foundation of their romance was built on deceit.

Kanwal’s story is a bit deceptive to the theme, but nevertheless, it is engaging and well told. Kanwal (Faiza Gilani) is an ambitious girl who would go to any length to discharge her duty, even if it means that she has to romance a gangster.

A go-getter, Zuvi (Sanam Saeed) is an artist, married to Raiz, the son of a well-known estate developer. How she keeps her marriage intact after finding the dark secrets of her husband forms the crux of her tale.

Massey Ma (Beo Ranna Zafar), guided by her husband’s creed, “Justice must prevail”, finds herself becoming unwitting, complicit in a murder. To what length she goes to correct her wrong is the core of her story.

The fifth episode tells us how Zehra (Eman Suleman), a medical student in love with her classmate Amar (Kashif Hussain), becomes the second wife of Naaji Shah (Saleem Mairaj).

The last episode tells us how Anarkali came into the lives of Naaji Shah and Mai Malki.

The non-linear format of the narrative could initially be off-putting and confusing, but by the third episode, the story-telling is clear and straight forward making the series an engaging view of love, lies and lessons of life.

The series offers some meaningful lessons despite its noir characters and tone. One that is very blatant surfaces in episode four, telling us, “when you are faced with what is fearful and what is right, you must do”.

Overall, the series boasts of ace performances by its abled cast, fine aesthetics, and faultless direction by Meenu Gaur. (IANS)