Prisha is no stranger to India New England, having been recognized as a India New England’s 20 under 20 in 2018 for her multiple achievements in community service, volunteering and academics.

Prisha trained under esteemed Guru Smt Durga Krishnan for over 10 years and delivered a full-length veena concert for her arangetram. Her performance was attended by about 250 guests despite the current pandemic and was also enjoyed online by friends and family around the globe. 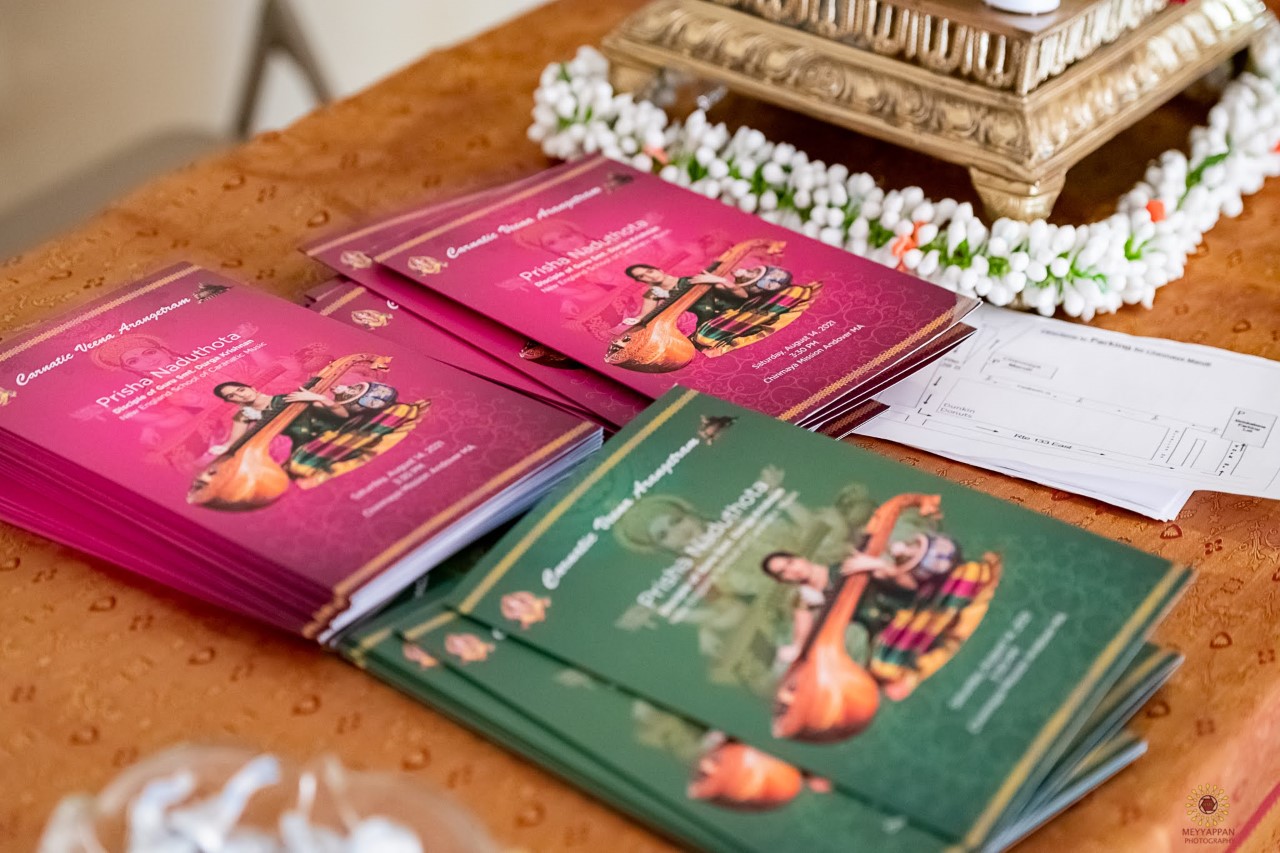 Carnatic Music is one of the oldest systems of music in the world and has a deeply spiritual and  devotional foundation. The Saraswati Veena is an ancient Indian lute-family instrument traditionally used in South Indian Carnatic Music and associated with the Hindu Goddess of knowledge and wisdom, Saraswati. The complexity of the musical form and the instrument allow its knowledge and expertise to be imparted only by the relationship between the Guru and the disciple. Smt Durga Krishnan, an accomplished Veena exponent and Prisha as the ideal student are the exemplars of this Guru Shishya Parampara.

Prisha took the opportunity of her debut performance (Arangetram) to showcase her mastery of the Veena with the requisite artistic creativity (manodharma), a very important aspect in a Carnatic music performance.

Smt Durga Krishnan’s confidence in her student could be seen by her selection of the tri-rāga pallavi composed in rāgas, śhaṇmukhapriyā, sāma, and ānandabhairavī, set to chaturasra ata-tāla for Prisha. She then skillfully executed the popular composition “Theerāda vilāyattu pillai” of the famous Tamil poet Shri Subramaniya Bharathiyar.

Prisha had a surprise in store for the audience – to mark India’s Independence day she played “jayati jayati bhārata mātā” in the rāga khamās. Padmashri Shri Lalgudi Jayaraman’s challenging composition of sindu bhairavi thillāna was the crest jewel in Prisha’s performance and was acknowledged by her Guru as a flawless performance.  She then finished the concert with Saint Purandara Dāsa’s “Bhāgyada Lakshmi Bāramma” and Bhadrāchala Rāmadās’s “Rāmachandrāya janaka…”  which brought the audience on their feet to a standing ovation. Prisha was accompanied by Vidwan Shri. Mahalingam Santhanakrishnan on the mridangam and Vidwan Shri Vaikom Gopalakrishnan on the ghatam. They provided spectacular support to the debutante, as they would have given a senior artiste on stage, throughout the performance.

Prisha had to wait an extra-long year as the previously planned date of her arangetram had to be postponed from last year due to the Pandemic.  Prisha gained with additional practice and special guidance from her Guru and delivered a performance that was world-class.  Congratulations to Prisha and her family on this milestone. Our special thanks to the family and the Guru for keeping this ancient, timeless tradition of Carnatic Veena alive and vibrant for the world to enjoy.