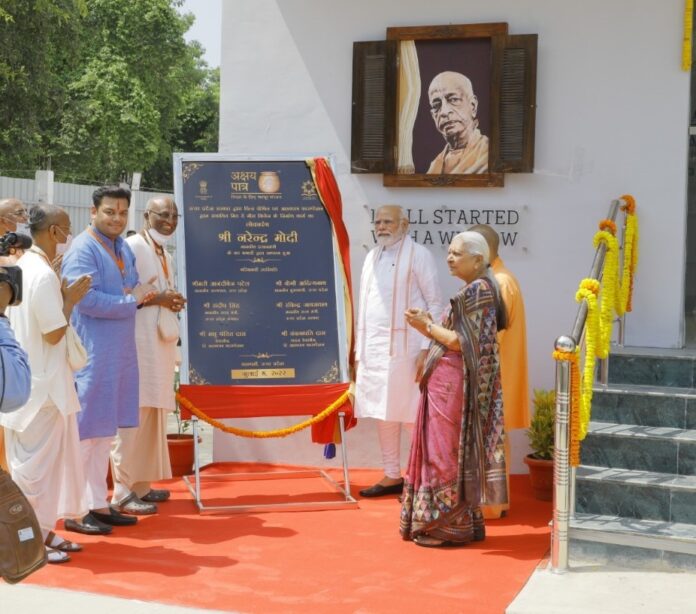 Governor Anandiben Patel and Chief Minister Yogi Adityanath were in attendance at the ceremony. The event was presided by Madhu Pandit Dasa, Chairman and Chanchalapathi Dasa, Vice-Chairman of the Akshaya Patra Foundation. Sandeep Singhal, Co-Founder & MD of WestBridge Capital, India along with his team also visited the kitchen on the day of the inauguration.

After the inauguration, the Prime Minister inspected the facility where meals were served to the children. The guests commended Akshaya Patra’s efforts to address hunger & malnutrition in the country and pledged their support for the organization’s endeavours.

Expressing immense gratitude, Madhu Pandit Dasa, said “I extend my heartfelt gratitude to the honourable Prime Minister, Narendra Modi ji for taking time off from his busy schedule to inaugurate our new kitchen in Varanasi. I want to thank the honourable Governor, Smt. Anandiben Patel ji and Honourable Chief Minister, Yogi Adityanath ji for gracing this auspicious occasion. Today, we write yet another chapter in our association with the Government of Uttar Pradesh.”

He added, “I also want to thank Mr. Sumir Chadha and Mr. Sandeep Singhal, co-Founders, West Bridge Capital & their team for sponsoring this kitchen and supporting our efforts to address classroom hunger. Such collaborative efforts by all the stakeholders will surely take us closer to our mission to ensure a world where children do not have to choose between education and food.”

The construction of the state-of-the-art centralized kitchen was supported by WestBridge Capital, an India focussed investment firm managing over US$7 billion of capital. WestBridge Capital has, over the last two decades, identified and invested in multiple high-quality businesses across public and private markets and developed deep expertise and broad networks in Indian business markets. Apart from Akshaya Patra, WestBridge Capital has been engaged in making investments in varied philanthropic projects on an ongoing basis across education, health and environment thematics.

The kitchen covers an area of 3 acres and marks Akshaya Patra’s 62nd kitchen which will serve 100,000 students in the district. Akshaya Patra has been an implementing partner of the Government of Uttar Pradesh for the school lunch program.

Established in 2000, The Akshaya Patra Foundation is the world’s largest school meal program, providing hot, nutritious school lunches to over 1.8 million children in over 20,000 schools through 61 kitchens in 14 states and two Union Territories in India. It costs only $20 to feed a child for an entire school year. In 2006, the Akshaya Patra Foundation USA was formed as a 501(c)(3) non-profit organization. The foundation is headquartered in Los Angeles, California and supports the Akshaya Patra mission by raising funds and awareness in the United States.