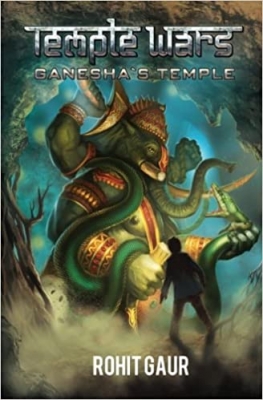 New Delhi– For the lovers of the “Lord of the Rings” and the “Bartimaeus Trilogy”, here’s an exciting new voice who packs fantastic, action packed quests and brilliant world building into an emotional roller coaster of a book. Rohit Gaur’s “Ganesha’s Temple” (Penguin Random House India) presents Ganesha in an entirely new light, while subtly conveying themes of truth, good vs evil, faith and duty in this great fantasy for middle graders.

The words “I will help you prepare yourself for the dangers that lie ahead” and Lord Ganesha’s appearance in a dream ring ominously in14-year-old Tarun Sharma’s mind as he and his family travel to a festival celebrating the elephant-headed god.

Tarun, the son of Kashmir’s chief minister, soon experiences his first taste of danger when terrorists attack the festival. He flees into the wilderness and takes shelter in a cave—where he meets Ganesha and discovers the deity needs his help.

Thus begins a journey into a mystical spirit world full of strange creatures and infused by the life-giving power of prana. Tarun must travel into the spirit world to return to Ganesha what’s his. But the clock is ticking as he struggles to avoid the evil Serpentine and races to complete his tasks. If he fails, the disastrous consequences will spill out of the spirit world and devastate the Earth.

Travel with Tarun on an odyssey of epic importance in “Ganesha’s Temple”, the first book in the Temple Wars series. It’s a fantasy adventure with a message that will inspire as a young boy discovers the strength and courage he needs to persevere.

Rohit Gaur grew up in New York City and would spend his evenings at the local bookshop reading myths and adventure stories from around the world Influenced by Marvel comics, Star Wars, anime and the cartoons he grew up watching, he often dreamt of creating a magical world based on India’s rich mythology, traditions and culture with fantastical beasts.