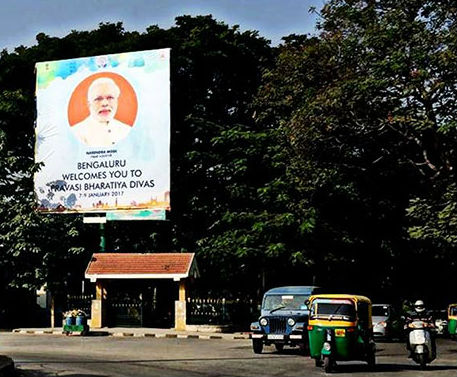 Bengaluru– The 14th Pravasi Bharatiya Divas or Non-Resident Indian (NRI) Day got off to a colourful start here on Saturday, with the young Indian diaspora from across the world connecting with their motherland and discovering its wonders.

Prime Minister Narendra Modi will officially inaugurate the event on Sunday and deliver the keynote address in the presence of Portugese Prime Minister Antonio Costa, the chief guest.

“With 65 per cent of the Indian population being under 35 years, it’s a great opportunity for the young diaspora to foster friendship, discover the country’s hoary tradition and rich culture and identify with its ethos,” said Karnataka’s Industry Minister R.V. Deshpande at the inaugural session of the three-day event.

Addressing the inaugural session of the Youth Pravasi Bharatiya Divas, Gen. V.K. Singh (Retd.), Minister of State for External Affairs, said, “By 2020, the average age in India will be 29 making it the world’s youngest country with 64 per cent of the population in the working age group. The Prime Minister’s vision will make India the skill capital of the world by 2022.”

Speaking on the focus of the government on the on the skill development, Singh said, “An increase in level of competency and range of skills in India would contribute to greater employment opportunities both within India and elsewhere, thanks to linkage and multiplier effects.”

“The skilling eco-system should also lead to innovation and techno-entrepreneurship which, directly or indirectly, result in social good,” he said in his address on “Role of Diaspora Youth in the Transformation of India”.

Talking on the development initiatives taken by the government, the Minister said, “Our dream is of a prosperous, skilful, enterprising, clean and futuristic India. The Smart Cities Mission, the Digital India, the Skill India, the Start Up India and the Swacchh Bharat Campaign are all part of our efforts to realise that dream.”

“We also look at our friends and partner countries to realise that dream. Our challenges also offer opportunities for you to be part of India’s growth story through which you will also realise your dreams.”

Lauding the contribution of the young Indian Diaspora worldwide, Union Minister for Youth Affairs and Sports Vijay Goel said the American business magazine Forbes had listed about 30 Indians below 30 years as super achievers and game changers in 20 industries, including healthcare, manufacturing, finance and sports.

“It’s a matter of pride and honour that Chief Executives of Google, Microsoft and PepsiCo are India-born Sundar Pichai, Satya Nadella and Indira Nooyi. President-elect Donald Trump has named South Carolina Governor Nikki Haley, daughter of Indian immigrants, as the US Ambassador for the United Nations,” said Goel.

Being held for the first time in Karnataka at the Bangalore International Exhibition Centre on the city’s outskirts, the three-day event has drawn about 1,800 NRIs from 72 countries to redefine their engagement with their motherland.

The Pravasi Divas had traditionally been held on January 9 to commemorate the return of Mahatma Gandhi as ‘Pravasi’ from South Africa to India.

Other Minister of State for External Affairs M.J. Akbar, Union Human Resource Development Minister Prakash Javedkar, Union Minister for Chemicals and Fertilisers H.N. Ananth Kumar and Niti Ayog Chief Executive Officer Amitabh Kant are among those who will address the gathering at the plenary sessions. (IANS)