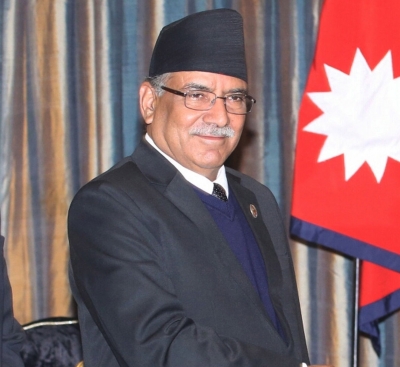 Kathmandu– Communist Party of Nepal-Maoist Centre Chairman and former Prime Minister Pushpa Kamal Dahal aka Prachanda, who returned home on Sunday after a three-day India visit, said that his trip was largely successful and fruitful than what he had thought.

Prachanda had visited India at the invitation of BJP President J.P. Nadda.

“Before leaving for New Delhi, I made it clear that I will keep national interest at core while talking with Indian leaders which I did. I am happy and my India visit has become more successful and fruitful than what I had thought,” he said at Tribhuvan International Airport here on his return.

In Delhi, Prachanda held talks with BJP President Nadda, External Affairs Minister S. Jaishankar, National Security Adviser Ajit Doval, Foreign Secretary Vinay Mohan Kwatra, among others. Before returning to Kathmandu, he also visited the BJP headquarters and discussed the building of party-to-party relations between the BJP and his CPN-Maoist Centre.

“I am happy with the hospitality and security given to me in New Delhi,” he said, adding that on the day he reached New Delhi, he discussed many things over dinner with the Indian Foreign Secretary.

Prachanda was expected to meet Prime Minister Narendra Modi but this did not happen.

“I was told I would meet Modiji but I don’t know why it didn’t happen,” he said.

“I don’t know the reason why the meeting was cancelled. I am not aware about the reason,” he said.

“Modiji could be busy in domestic things because yesterday, India was hit by floods and landslides,” he said.

“I went to New Delhi at the invitation of J.P. Nadda. I met several leaders and put my agenda and position. There was no meaning in only taking a photo with Modiji. I am not in tension for not meeting Modiji. It would have been good if I had been able to meet Modiji but that couldn’t happen… whatever I needed to communicate, I communicated though the Indian ministers and officials,” Prachanda said.

“I didn’t feel any difference between my visit as Prime Minister and now,” he added. (IANS)