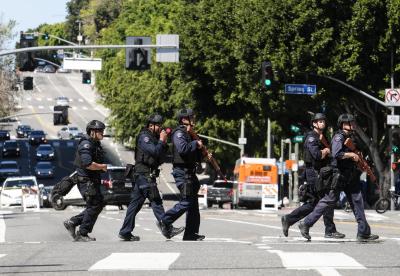 Los Angeles– The US Department of Homeland Security (DHS) warned federal and local law enforcement agencies that a group of protestors planned to organise a Canadian truck-style convey, perhaps starting in Los Angeles for Super Bowl on Sunday, local media has reported.

Many news outlets on Thursday claimed they obtained a bulletin released by the DHS, which said the convoy could meet first in Los Angeles then head east, perhaps reaching Washington, D.C. in time for US President Joe Biden’s State of the Union address scheduled on March 1, Xinhua news agency reported.

The authority “has received reports of truck drivers planning to potentially block roads in major metropolitan cities in the US in protest of, among other things, vaccine mandates for truck drivers,” the bulletin said, adding the group intended to gather truckers as they travel across the country and truckers from Canada may join the caravan.

“While there are currently no indications of planned violence, if hundreds of trucks converge in a major metropolitan city, the potential exists to severely disrupt transportation, federal government operations commercial facilities and emergency services through gridlock and potential counter protests.” it said.

However, the Los Angeles Times reported on Wednesday that authorities said they are monitoring concerned information online but they are only aware of efforts to begin a truck convoy either in the Coachella Valley or Sacramento, capital city of California, that would eventually gather steam across the country and head to Washington.

One of the posts released by so-called “Organisers of People’s Convey” promoting the Coachella gathering suggests it would start in March.

“On March 4, 2022, truckers and all freedom-loving Americans will begin arriving at Coachella Valley in Indio, California, to participate in a rally being held the afternoon of March 4 and 5 to defeat the unconstitutional mandates.” the post said.

The Los Angeles Times’ report said fliers posted on the web calling for a protest or truck protest at Sunday’s Super Bowl are vague and it’s unclear whether there is any real support.

“At this time we do not have information regarding any incidents,” the Los Angeles Police Department said in a statement on Tuesday. “If a situation were to arise we have sufficient amount of officers.” (IANS)