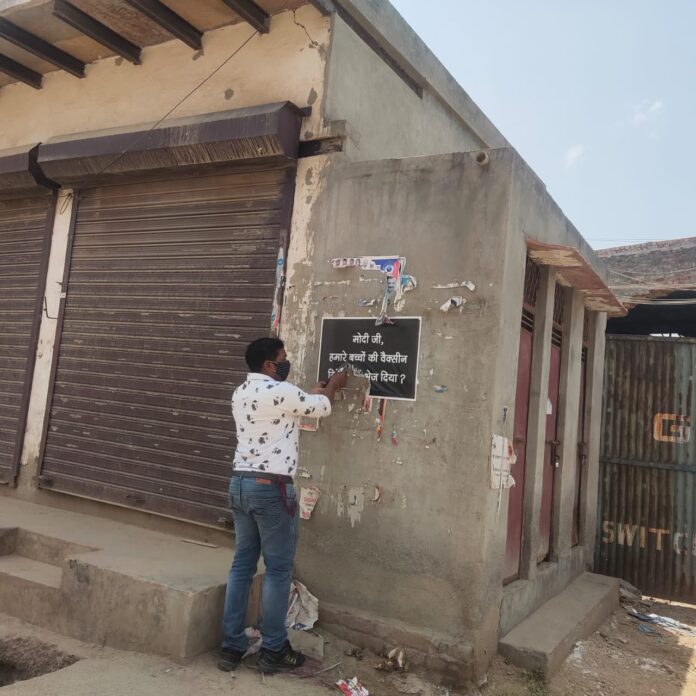 New Delhi– Almost three days after several posters criticising Prime Minister Narendra Modi came up in several parts of the national capital, the Delhi Police has arrested over a dozen people in connection with the cases it registered, sources said on Saturday.

The matter relates to black colour posters criticising the Prime Minister for exporting the Covid-19 vaccines to other countries instead of fulfilling the requirements of the people of the country.

The posters were found in several areas of Delhi like Shahdara, Rohini, Rithala, Dwarka and several others.

Budh Vihar ward councillor Gayatri Garg told IANS, “On May 12, we got the information that several posters have been stuck in areas of Budh Vihar, Vijay Vihar and others. Following the information, I along with my husband and several other members got those removed on May 13.”

A Delhi Police source said that the police has registered over 17 FIRs in connection with the posters against the Prime Minister.

The source said that the police has also obtained CCTV footage from Shahdara area where people were seen putting up the posters.

The source said that the police is interrogating the person to identify other people.

The source further said that it has also come to notice that for sticking three posters, the people were paid Rs 500 in Shahdara area.

The source said that the police is investigating if there is any involvement of any political party behind the posters in the city.

The posters in several areas of the city came after the Delhi government red flagged the central government over the shortage of Covid vaccines in the city.

Several states across the country have complained of vaccine shortage to the central government.

Several opposition parties have also criticised the Central government for not ordering the vaccines for the people of the country and instead exporting them to other countries.

The national capital has been one of the worst-hit territories in the second wave of the coronavirus pandemic last month with many people struggling to get hospital beds, oxygen cylinders and medicines.

The city also witnessed horrific scenes from hospitals and cremation sites with many deaths due to lack of oxygen supply and people waiting to perform the last rites of their family members.

Meanwhile, the Covid infection numbers have come down in the last few days after thousands of deaths.

India has reported more than 3 lakh infections a day over the past 23 days, overwhelming its healthcare system and leaving many without hospital beds, oxygen and adequate treatment across the country.

The Modi government has faced severe criticism for its move to deal with bad publicity because of the mis-steps rather than solving the crisis.

Even several governments in states like Uttar Pradesh, Gujarat and Madhya Pradesh have been accused of trying to hide their casualties as hundreds of bodies have been seen floating in rivers and buried in the sand by the banks. (IANS)