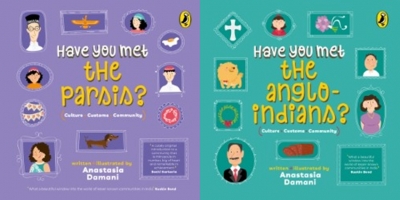 New Delhi– Here are two gorgeously illustrated picture books on the culture and lives of lesser-known communities in India, starting with the first two books in the Have You Met series (Penguin Random House India), for younger kids to know the culture and customs, the heritage and food habits, and the festivals of these communities.

“Have You Met the Parsis?” and “Have You Met The Anglo Indians?” by Anastasia Damani, complementing the text and lush, full-colour illustrations with activity sections, such as arts and crafts and recipes, makes for good parent-child activity.

“What a beautiful window into the world of lesser-known communities in India,” says author Ruskin Bond, himself a prolific writer for children.

Did you know that several Parsi families, originally from Iran, sailed to India on large wooden boats? They landed in a town called Sanjan in Gujarat and blended in peacefully with the people.

The Theatrewalas are one such family. Say “su karech” to Uncle Cyrus and Aunty Jeroo; their three kids, big brother Darius and twin sisters Farah and Freya; and the sixth member of the family, Twiggy Theatrewala, the dachshund.

Come, discover Parsi food, festivals and attires with the Theatrewala family! Learn to cook lip-smacking Parsi bhonu, fill your pocket of good deeds and make beautiful decorations next Navroz. Also find out about iconic Parsis such as Freddie Mercury and Jamsetji Tata.

So let’s get started, dikras and dikris!

* “Have You Met the Anglo Indians?”

“Arre what men!” Meet Aunty Joyce and Uncle Charlie Lovedale, and their two wonderful children named Rosie and Leslie and a third rather fluffy child whose name is Penny the Pomeranian The Lovedale family is an Anglo Indian family.

Did you know that after the British left India in 1947 many English and Irish families decided to stay back and make India their new home? The Lovedales are one such family They’re known as Anglo-Indians because their families are of both English and Indian descent.

Come, learn about the food, festivals, attires and about iconic Anglo Indians, such as Ruskin Bond and Derek O’Brien, with the Lovedale family!

Anastasia Damani is an illustrator-turned-author, musician and theatre lover. When she’s not donning one of these hats, she likes curling up with a warm cup of tea. After completing her graduation from Symbiosis Institute of Design, Pune with a degree in communication design, she began her journey in her hometown, Kolkata, and now lives in Copenhagen.

Anastasia enjoys writing and illustrating across mediums with children’s books as her first love. Through her work, she strives to promote love, confidence, respect and responsibility in children.  (IANS)