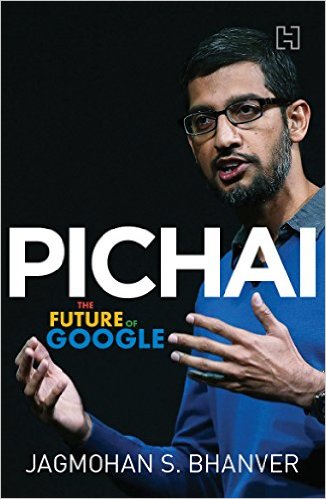 Sundar Pichai has become a household name in India. He has become an inspirational figure for young dynamic Indians. This book takes us through the journey of the man from a self-driven school boy to the chief executive of search engine giant Google, a position he assumed last August.

Born on July 12, 1972, in Madurai, Sundar Pichai’s childhood was spent in Chennai. His father was employed as a senior engineer with a British multinational that made switchgears. His mother gave up her job after Sundar and his brother were born. The Pichais’ simple lifestyle helped keep the children grounded.

The author, Jagmohan S. Bhanver, who has worked with three of the largest banks in India handling national and international roles, has tried to balance Pichai’s personal and professional life in this book.

The author highlighted that most people who have succeeded in their lives have had their fair share of challenges. “If everyone who won the race had a favoured past, there would be no motivational stories to inspire those who haven’t had fortune shone upon them yet.”

“One thing that separates the true winners from the also-rans is their indomitable spirit to rise above their tribulations and go to war with whatever they have, rather than sit at home complaining about what they don’t,” he said.

The book says that even as a student Sundar had set goals for himself. He demonstrated a degree of self-drive that is rare in one so young. Sundar’s father has said several times that he never had to tell Sundar to study because Sundar would be doing it on his own without being told. Sundar’s friends also talk about his unwavering attention as he would read a book even in the cycle rickshaw on the way to school and back home.

Better known as P. Sundararajan during his stint at IIT-Kharagpur, he kept a low profile. While he was enrolled in the metallurgy programme, he was also immensely interested in electronics, too. The suppleness of the IIT system encouraged Sundar to balance both his interest and his core curriculum.

It is at IIT that Sundar met the woman who later became his wife. While Sundar proposed to her during their final year, they were able to marry only a few years later. After IIT, he went to the US to master in science at Stanford.

The book charts his journey from McKinsey to Google. The author said: “Perhaps, the man from Chennai always had those skills within him and merely needed the right ecosystem for it to flourish – an ecosystem called Google!”

“In the 11 years that Pichai has been at Google, he has demonstrated an uncanny ability to focus on products and solutions that have worked wonders for the Mountain View based company.”

The book also focuses on the key factors that led to Sundar Pichai’s meteoric rise in Google. What began in 2010 culminated in 2015 with Larry Page bringing Pichai to the helm of Google.

Outwardly quiet and apparently easy-going Sundar Pichai has a will of steel that surfaces when it is required. He has time and again demonstrated that he will do what he believes in, and that he believes in what he does.