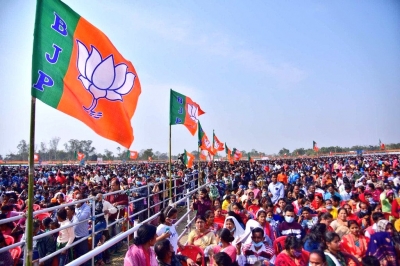 Guwahati–Prime Minister Narendra Modi on Sunday said that some forces sitting abroad are conspiring against India, but the people of the country would not allow them to succeed.

Addressing a massive public gathering at Dhekiajuli in northern Assam’s Sonitpur district, the Prime Minister without naming any person and organisation said that the conspirators sitting abroad not only conspiring against India but also maligning the world famous Indian and the Assam tea.

He said: “Some documents have revealed such conspiracies plotted abroad. Despite the conspiracy, Assam and India would go forward. Let them do their conspiracy, but the people of India would not make them succeed.”

“I want to tell you about the conspiracy hatched to defame the country. They are saying the image of Indian tea has to be defamed worldwide, systematically.”

Modi said that in this year’s Budget major thrusts were given in infrastructure development in India and the northeast region.

“With the development of the connectivities, trade and business would further flourish. New India would be Aatmanirbhar Bharat. The new India would take Assam to a new height of development.”

The Prime Minister said that the Northeastern region has left behind communal tension, terrorism, crisis, hatred, and conflicts and is now surging ahead after waiting for long years.

The Central government is taking forward the region with all sincerity. The region was backward as the people earlier stayed far away from the region.

The recent Bodoland accord and subsequent elections to the Bodoland Territorial Council are the example of “bikash and viskwas” (growth and trust) to work together, he added.

“Today is a special day for me. Today I got the opportunity to pay respect to this historic land of Dhekiajuli. In this land, people defeated the aggressors. In 1942, people here martyred to protect the nation and to respect the tricolour.

“Every drop of martyrs’ blood makes our resolve stronger, thus this rich history makes me take pride on Assam.”

Referring to the song of great singer and composer Bhupen Hazarika, Modi said that the sun rises first in Northeast, but the morning of development had to wait long for Assam and Northeast.

In his 31-minute speech in Hindi, the Prime Minister said that since independence for seven decades Assam has six medical colleges, but in last five years building of six more medical collages had started resulting 1,600 MBBS doctors would come out every year in Assam.

The Prime Minister announced that one medical college and one technical institution in each state to be taught in the mother tongue of the local people.

He said that th under construction AIIMS in Guwahati would be ready within one-and-a-half years making Guwahati a hub of the modern medical treatment not only for Assam it would cater all the eight Northeastern states.

Modi said that the Ayushman Bharat Yojana has been incorporated in Assam 350 hospitals benefiting 1.50 crore people in getting free treatment while huge numbers of people also benefited under the Atal Amrit Abhiyan scheme.

“Entire world is now praising the way India undertook its Covid vaccination drives. In this year’s Budget unprecedented allocation has been made for the health sector as this sector is now our priority sector. In 600 districts we would set up integrated labs so that the people can not go far away for various testing.”

Modi said that nobody knows better than him about the flavour of Sonitpur’s red tea.

“Assam is also developing its world famous tea. Only yesterday (Saturday), crores of rupees were given directly to the bank account of 7.50 lakh tea garden workers. Rs 1,000 crore special package has been earmarked for the welfare of the tea garden workers in Assam and West Bengal,” he said.

From the Dhekiajuli public meeting, Modi laid the foundation stone for two medical colleges in Biswanath Charali and Charaideo and launched the ‘Assam Mala’ project to upgrade the state highways.

The two medical colleges and hospitals are being set up at a total estimated project cost of over Rs 1,120 crore. Each hospital will have a 500-bed capacity and 100 MBBS seat capacity.

Under the ‘Assam Mala’ scheme, the state Public Works Department would upgrade 2,500 km state highways at a cost of Rs 5,000 crore in 15 years.

Sunday’s visit is the Prime Minister’s second visit in the poll bound Assam in a fortnight.

On January 23, Modi had launched the allotment of land “pattas” (land allotment permit) to 1,06,940 landless indigenous people at the historic Jerenga Pothar in Sivasagar district.

Elections for the 126-member Assam Assembly are expected to be held along with the Assembly polls in West Bengal, Tamil Nadu, Kerala and Puducherry in April-May. (IANS)