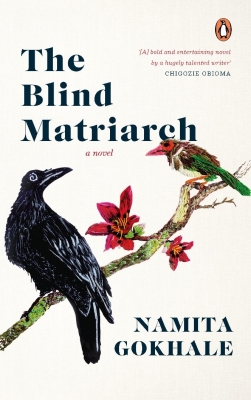 New Delhi– One of Indias most respected and well-known literary figures, Namita Gokhale, has written a family saga that is both contemporary and timeless. Set against the backdrop of the pandemic, it explores the traditional bonds of the Indian joint family in the face of upheaval.

“The Blind Matriarch” has already earned praise from the likes of writer Chigozie Obioma and India’s best-loved poet Gulzar.

The sprawling novel follows the life of the eponymous blind matriarch who lives on the topmost floor of an old house with many stories. Ebbing and flowing like the waves of a pandemic, the novel is a clear-eyed chronicle of the tragedies of India’s encounter with the coronavirus, the cynicism and despair that accompanied it, and the resilience and strength of the human spirit.

The design of this book comes with its own story. Penguin Random House India art director Ahlawat Gunjan read the novel and commissioned a stunning embroidered panel for the cover which interlaces intricately with the many threads of the tale. Gokhale then wove elements of the panel itself into the rich tapestry of the book. The imagery on the cover reflects the narrative of the protagonist, Matangi, worked lovingly upon, even as her eyesight began abandoning her. Most jackets are the beginning of a book’s journey in the reader’s hands, but here it is also the very fabric of the book.

Gokhale says “The Blind Matriarch”, which she began just before the pandemic set in, “followed through on thoughts and themes from many of my previous novels. It is a quiet book, paced in a real-time narrative of lock-down days, which examines the dynamics of the Indian joint family. The central character, the blind matriarch Matangi Ma, has remained in my heart and mind long after I finished the book”.

Manasi Subramaniam, Executive Editor and Head of Literary Rights at Penguin Random House India says: “The Namita Gokhale bookshelf is an unexpected and unpredictable mix. Her range seems almost limitless, right from ‘Paro’ in 1984, a groundbreaking tale of female sexuality, to ‘Jaipur Journals’ in 2020, a charming romp across the greatest literary show on earth. She has done it yet again, with ‘The Blind Matriarch’, and we are especially proud to publish her twentieth book.”

Gokhale is an award-winning writer and festival director. She is the author of eleven works of fiction and has written extensively on myth as well as the Himalayan region. Her acclaimed debut novel, “Paro: Dreams of Passion”, was published in 1984. Her recent novel “Jaipur Journals”, published in January 2020, was set against the backdrop of the vibrant Jaipur Literature Festival. “Betrayed By Hope”, a play on the life of Michael Madhusudan Dutt, was also published in 2020.

A co-founder and co-director of the Jaipur Literature Festival, Gokhale is committed to supporting translations and curating literary dialogues across languages and cultures. She was conferred the Centenary National Award for Literature by the Asam Sahitya Sabha in Guwahati in 2017. She won the Sushila Devi Literature Award for her novel “Things to Leave Behind”, which also received the Best Fiction Jury Award at the Valley of Words Literature Festival 2017, and was on the longlist for the 2018 International Dublin Literary Award.(IANS)