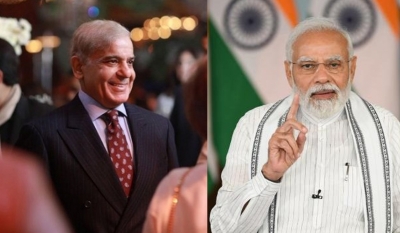 Sharif’s letter on Sunday comes in response to the congratulatory message sent by Modi earlier in the day in which the latter said India supported constructive ties with Pakistan.

The Pakistani Prime Minister replied to the Indian Prime Minister’s letter and sought resolving of the outstanding issues between the two countries, including that of Kashmir, while stressing that Pakistan wants peaceful and friendly ties with India, media reports added.

India has however, reiterated its stand that it wants strong diplomatic ties with Pakistan provided that Islamabad creates a terror-free environment and hostility for any form of engagement.

“Congratulations to H.E. Mian Muhammad Shehbaz Sharif on his election as the Prime Minister of Pakistan. India desires peace and stability in a region free of terror, so that we can focus on our development challenges and ensure the well-being and prosperity of our people,” PM Modi tweeted on April 11.

The relations between India and Pakistan have further deteriorated after India in August 2019 announced the abrogation of Article 370 in Jammu and Kashmir and bifurcated the state into two union territories. (IANS)