NEW DELHI– Shot, strangled, burnt and stoned — over a thousand women are victims of honour killings annually in Pakistan, says the country’s first Academy Award winner Sharmeen Obaid-Chinoy, who is in the Oscar race yet again for her latest documentary of a rare survivor.

The celebrity Pakistani filmmaker says a bigger victory than the golden statuette would be the passing of a stricter law against the “heinous crime”. 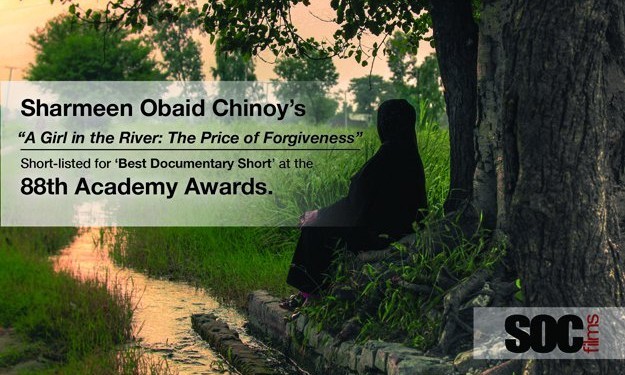 “With the world watching, I want to send out a strong message that although honour killings are prevalent in Pakistan, they are not a part of our culture or religion. I think it will be an even bigger win if we, as a nation, take this opportunity to acknowledge that we have a problem and pass the Anti-Honour Killings Laws (Criminal Laws Amendment) Bill 2014,” Obaid-Chinoy told IANS in an e-mail interview from Karachi.

Her film, “A Girl in the River: The Price of Forgiveness”, is about Saba Maqsood, whose only “fault was falling in love”. It follows her journey for justice after she survives being shot and thrown in a canal by her family members for marrying a man of her choice.

The larger impact of the film landing in the Documentary (Short Subject) category of the Oscars 2016 last month turned out to be a wake-up call for the Pakistan government.

While congratulating Obaid-Chinoy, Pakistan Prime Minister Nawaz Sharif expressed the government’s commitment to rid the country of the social evil with “appropriate legislation”.

It led Obaid-Chinoy to start an online petition to this end, with an aim to garner 5,000 signatures before it’s sent out to Sharif.

Talking about the bill, she said: “It aims to make the crime non-compoundable so that a convicted person cannot escape culpability by being ‘forgiven’ by the victim. The bill passed through the Senate in March 2015, but lapsed in Parliament later that year.

“We are determined to push all stakeholders to pass the Anti-Honour Killings Laws (Criminal Laws Amendment) Bill 2014 in Parliament. This would right a long-standing wrong in the Pakistani society and ensure that perpetrators are punished and victims are protected.”

Obaid-Chinoy said that there’s no comprehensive list of honour killings that occurred in Pakistan in 2015, but there were over 1,005 people killed in 2014 alone in the name of honour. “Men are also subjected to honour killing, but the prime victims are women,” she said.

A filmmaker who believes in addressing “issues that people do not want to discuss” — like in her Oscar winning 2012 documentary “Saving Face” where she brought forth the plight of Pakistan’s acid attack victims — Obaid-Chinoy feels a “film can be a powerful tool to convey complex and difficult problems in a way that prompts dialogue and empathy”.

It is only apt then that she says that “A Girl in the River…” provides a unique insight “not only into the issue of honour killing but also the kind of pressures that those who survive have to face”.

She says it was important for her to tell Saba’s story in an honest and distinct manner. “It speaks volumes about the kind of choices women have in the world and how our lives are impacted by the decisions taken by others,” she said, adding that “documentary films portray the subject in its most natural setting, diminishing the possibility of embellishment”.