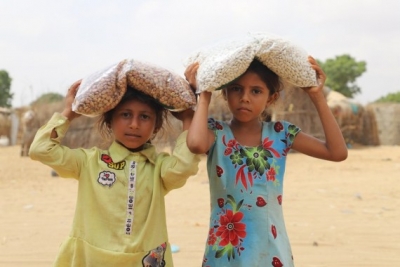 United Nations– Around one tenth of the global population, between 720 million people and 811 million, were undernourished last year, according to a UN report .

Global hunger levels have skyrocketed because of conflict, climate change and the economic impact of the Covid-19 pandemic; and one in five children around the world is stunted, said the report titled, ‘The State of Food Security and Nutrition in the World 2021’ released on Monday.

New data that represents the first comprehensive global assessment of food insecurity carried out since the pandemic began, indicates that the number of people affected by chronic hunger in 2020, rose by more than in the previous five years combined, Xinhua news agency reported.

Reversing this situation will likely take years if not decades, according to the World Food Programme (WFP), Food and Agriculture Organization, the International Fund for Agricultural Development, World Health Organization and Unicef.

“The pandemic continues to expose weaknesses in our food systems, which threaten the lives and livelihoods of people around the world,” the heads of those agencies wrote in this year’s report.

Some 418 million of the undernourished people last year were in Asia and 282 million were in Africa, according to the report.

Globally, 2.4 billion people did not have access to sufficiently nutritious food in 2020 – an increase of nearly 320 million people in one year.

The report also highlights how climate change has left communities in developing countries most exposed to hunger – despite the fact that they contribute little to global CO2 emissions.

These poorer nations are also the least prepared to withstand or respond to climate change, said WFP’s Gernot Laganda, who added that weather-related shocks and stresses were “driving hunger like never before”.

This suggests that “it will take a tremendous effort for the world to honor its pledge to end hunger by 2030”, the agencies said in a statement, in a call for food production to be more inclusive, efficient, resilient and sustainable.

Children’s healthy development has suffered too, with more than 149 million under-fives affected by stunting and 370 million missing out on school meals in 2020, because of school closures during the coronavirus pandemic.

Today, 150 million youngsters still do not have access to a school lunch, said WFP, which urged countries to restore these programs and put in place “even better (ones) that give children and communities a future”.

“The (report) highlights a devastating reality: the path to Zero Hunger is being stopped dead in its tracks by conflict, climate and Covid-19,” said WFP Executive Director David Beasley.

Children’s future potential “is being destroyed by hunger”, he insisted.

“The world needs to act to save this lost generation before it’s too late.”

In September, the UN will convene a Food Systems Summit with the objective of launching bold new actions to build healthier, more sustainable and equitable food systems around the world.

In the lead-up to this pivotal event, the UN is inviting stakeholders from all sectors, across all food systems, to get involved.

This report presents the first global assessment of food insecurity and malnutrition for 2020 and offers some indication of what hunger might look like by 2030, in a scenario further complicated by the enduring effects of the pandemic.

It also includes new estimates of the cost and affordability of healthy diets, which provide an important link between the food security and nutrition indicators and the analysis of their trends.

Altogether, the report highlights the need for a deeper reflection on how to better address the global food security and nutrition situation.(IANS)