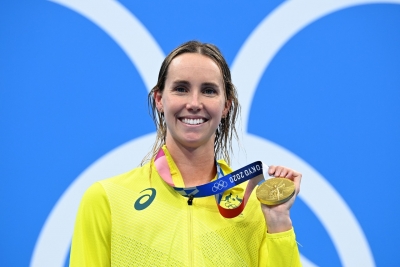 Tokyo–With the Tokyo Olympic Games closing on Sunday night, here’s a look at some facts and figures about these special Games held under the influence of Covid-19 pandemic after a one-year postponement:

2. Most decorated athletes
Australian swimmer Emma McKeon won seven medals at Tokyo 2020, the most among all athletes. The 27-year-old triumphed in women’s 50m and 100m freestyle, as well as 4x100m freestyle and medley relay, reports Xinhua.

Caeleb Dressel of the United States is the athlete taking home the most gold medals. With five victories from men’s 50m and 100m freestyle, 100m butterfly, 4x100m freestyle and medley relay, he is the most successful male swimmer in the pool in Tokyo.

3. Youngest and oldest medal winners
At 13 years and 330 days, Momiji Nishiya of Japan, women’s street skateboarding champion, is the youngest Olympic gold medalist in Tokyo. American diver Marjorie Gestring, at 13 years and 267 days, set the record for the youngest winner at the 1936 Berlin Games.

The oldest Olympic champion at Tokyo was the German equestrian rider, Dorothee Schneider. At the age of 52, she won dressing team gold, with teammate Jessica von Bredow-Werndl and Isabell Werth, who is also 52, months younger than her.
12-year-old Japanese skater Kokona Hiraki, the silver medalist of women’s park, is the youngest Olympic medalist in Tokyo, while 62-year-old Australian equestrian rider Andrew Hoy is the oldest Olympic medal winner here with a silver from team eventing and a bronze from the individual.

4. “Best tested community”
Tokyo 2020 is unique, not only in the way that is a historic first to be postponed but it is held with the COVID-19 pandemic still rampant, especially with its variants.
According to the organizers, since July 1, 436 Olympic and Paralympic-related personnel tested positive for COVID-19 as of Sunday. 42,500 arrival tests were conducted at a positivity rate of 0.08%, and 571,000 screening tests at a positivity rate of 0.02%.

“I think it’s fair to say that the Olympic community here in Tokyo has been the best-tested Community anywhere in the world during the last few weeks,” said the International Olympic Committee (IOC) president Thomas Bach.

5. Digital engagement
As no spectators were allowed in the vast majority of the venues, the IOC resorted to digital engagement to create an atmosphere that made athletes feel they were not alone.

A cheer wall was established in the stadiums with more than 250 million videos coming from different corners of the world, supporting athletes from their National Olympic Committees and the Refugee Olympic Team.

According to the IOC, Tokyo 2020 social posts have generated more than 4.7 billion engagements as of Friday, with the majority of them during games time.

6. Anti-doping
Zero positive cases were discovered in the competitions, which means no athletes are disqualified for anti-doping violations in Tokyo.

However, Georgia’s national shot put record holder Benik Abramyan missed his qualifying event on Tuesday after being provisionally suspended from competition due to a positive result in an out-of-competition test on July 31.

Brazilian Olympic volleyball player Tandara Caixeta was sent home before their final clash with the United States after she was suspended in a doping case prior to the Olympics. (IANS)