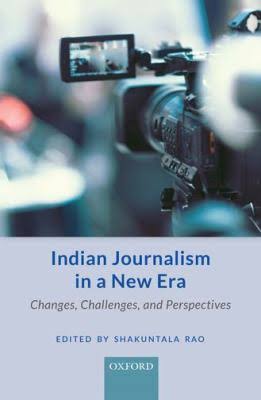 New Delhi– Despite the breadth and scope of the Indian media, there is little meaningful literature available about journalism practised in the country today. There have been individual accounts by journalists, some of them pretty eminent, but rarely has an attempt been made to present a holistic picture from the 21st century’s perspective. A new book seeks to address the requirement. You can also discover the fascination of India’s churches, their history and legends, the early arrival of Christianity, India’s first encounters with Europeans and the magnificence of India’s church architecture; and finally, there is another book that just lets you – well, chill!.

The IANS Bookshelf has much to ponder over this weekend.

The explosion and ubiquity of media has raised some important questions about journalistic training, professionalism, ethics education and pedagogy. There is now global hand-wringing about the changing nature and future of journalism, especially in democratic societies. This has been occasioned by the seismic shift characterised by new forms of journalism, global connectivity, multi-directional flows of information, instantaneous reporting, multimedia content and extreme content customisation.

Thus setting the tone, editor Shakuntala Rao, a Professor at the Department of Communication Studies, State University of New York, Plattsburth, brings together papers on contemporary Indian journalsim from 21 Indian and global scholars and journalists in four different sedtions – each addressing issues like history and evolving challenges; social media and e-journalism; marginalisation; pedagogy and ethics.

One of the telling comments: “The Indian media’s concerns about a panopticon state in the making are nowhere as sharp as they should be. This is reflected in the seeming acquiescence of the public in the purported needs of national security by the state.” Journalism and Ethics: India Media Mines the Private/ Geeta Seshu – Mumbai-based independent journalist.

A valuable addition at an appropriate time.

Beautifully preserved, they’re there almost everywhere – well, almost everywhere. In Kerala, churches can be seen wherever one looks, while in Rajasthan or Gujarat, it would be difficult to find one. How they came to be part of India’s landscape is a fascinating story which began in the 1st Century and continues till now.

Religious buildings give India its identity as a nation of diverse people with their own cultures. It is a country with one of the world’s richest architectural traditions. With over 300 photographs, the majority of them by the author herself, this is one of most comprehensive works on India’s churches to date.

“Though much church photography concentrates on the massive exteriors and soaring interiors of churches, I have also focussed on the small details,” Taylor writes,

Definitely a book to treasure.

Imagine a pressure cooker with a life of its own that takes off like a shrieking banshee; or ordering all of 12 ‘khulchas’ when what was was meant was ‘phulkas; or a washing up exercise that makes the kitchen look as if several crows have had a satisfying bath there; or an aching right arm that is diagnosed as a ‘rotor cuff tear’?

“Before all else, the Claimer (the opposite of a disclaimer in case the word had you stumped) – this is a work of non-fiction. Names, places and incidents are not entirely the product of the author’s imagination and every resemblance to any actual person, living or dead, creature, great or small, events momentous or trivial and locales, exotic or familiar, is deliberate,” says Khyrunnisa, the author of the popular fortnightly column, “Inside View” that appeared in The Hindu MetroPlus.

Crackling with humour that would make your jawbones ache, this is one engrossing read. (IANS)