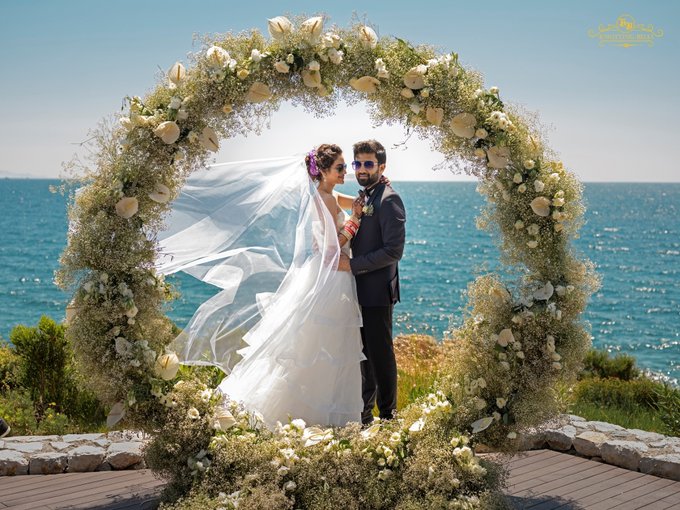 Kolkata–Amidst a serene floral setup and multi-cuisine menu, newly-wed couple Nusrat Jahan and Nikhil Jain exuded charm as they personally welcomed a slew of eminent guests at a reception party here on Thursday.

The actress-turned-MP looked beautiful in a wine-coloured velvet lehenga, while her husband opted for a velvet Bandhgala of a dark shade as they hosted the party at ITC Royal.

The event, held under high security, was graced by West Bengsl Chief Minister Mamata Banerjee. Nusrat Jahan’s best friend-cum-fellow MP Mimi Chakraborty was by her side wearing a dark-green lehenga.

Earlier in the morning, the couple had attended the International Society for Krishna Consciousness (ISKCON) Rath Yatra event along with Banerjee.

The beautiful sewing-themed invite for the reception was sent out to film directors, actors that Nusrat has worked with, important names from the field of politics along with family and friends.

“The cuisine is a mix of Italian, Bengali, pure vegetarian and non-vegetarian dishes. The vegetarian section is being planned carefully keeping her in-laws’ (who are Jains) guest list in mind,” a close associate of Nusrat had told IANS.

“She has taken special care of the Bengali food section as she loves Hilsa, prawn and bhetki preparations. Guests will surely be treated with delectable Biryani. Nusrat has a sweet tooth so she is taking special care of the desserts. Special Makha Sandesh from Basirhat is a part of the menu along with several sweets fused with mangoes,” the associate said.

The beautiful actress had looked every bit the traditional bride in a red designer lehenga as she tied the knot with her businessman beau Nikhil Jain in the picturesque Turkish town of Bodrum on June 19. (IANS)