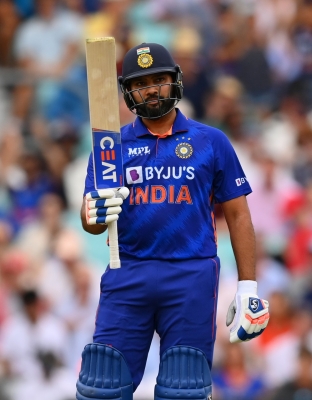 Manchester– India skipper Rohit Sharma has asserted there are no issues as far as the top order is concerned, in spite of the fact that it has failed to fire on most occasions in the all-format series against England over the last one month.

As India celebrated their ODI series win on Sunday even as several top-order batters, including Rohit Sharma, Virat Kohli and Shikhar Dhawan, failing to fire, it was left to wicketkeeper-batter Rishabh Pant and Hardik Pandya to bail the tourists out of trouble and win the match, and with it the series.

Pant smashed a 113-ball unbeaten 125, while Pandya was equally belligerent scoring a 55-ball 71 in India’s five-wicket win in the ODI series decider. All this after the tourists were reduced to 38/3 with Sharma (17), Dhawan (1), and Kohli (17) contributing a miniscule percentage of runs at the top in the chase of 260 for victory.

However, the captain only said, it is something which will have to be addressed.

“Not really (batting issues). But we do understand that it is something we need to look into. We played some not-so-good shots and that’s what cost us wickets. But I still back those guys to come out good because they’ve done it for a long time. I’ve got nothing more to say since I understand the quality they bring to the team.”

Sharma said there will be injury scares between now and the T20 World Cup this year and ODI World Cup in 2023, as it is part and parcel of the game, but added that India has a “solid” bench strength to take care of that.

“We’ve got some solid guys in the bench who are looking for a long time to get a game. We want to create that bench strength because the kind of games we play, injuries are bound to happen and you need to manage workload. It is a conscious effort.”

As for the T20I and ODI series wins, Sharma said it felt nice to achieve it in tough conditions.

“Very pleased (with the win). We came here, wanted to achieve something as a group in white-ball, and we did. Moving forward there are things we need to improve but pleased with the effort. We were here last time and we were beaten, I remember. It is not easy place to come and win games but the way we played entire white-ball leg was fantastic.

“Wanted to do it for a long period of time, to achieve it was brilliant. The positive is that these guys haven’t batted a long period in the middle overs and we got to see that from Rishabh and Hardik. Both of them were clinical — at no point did we feel they were panicking. They played great cricketing shots. (Yuzvendra Chahal) He is a critical member, has so much experience, bowling in all sorts of formats. It was unfortunate that he missed the last T20 World Cup, but I’m pleased with how he has returned. Hardik as well, used the dimension well while bowling. One side was long and used the bouncers well,” added Sharma. (IANS)