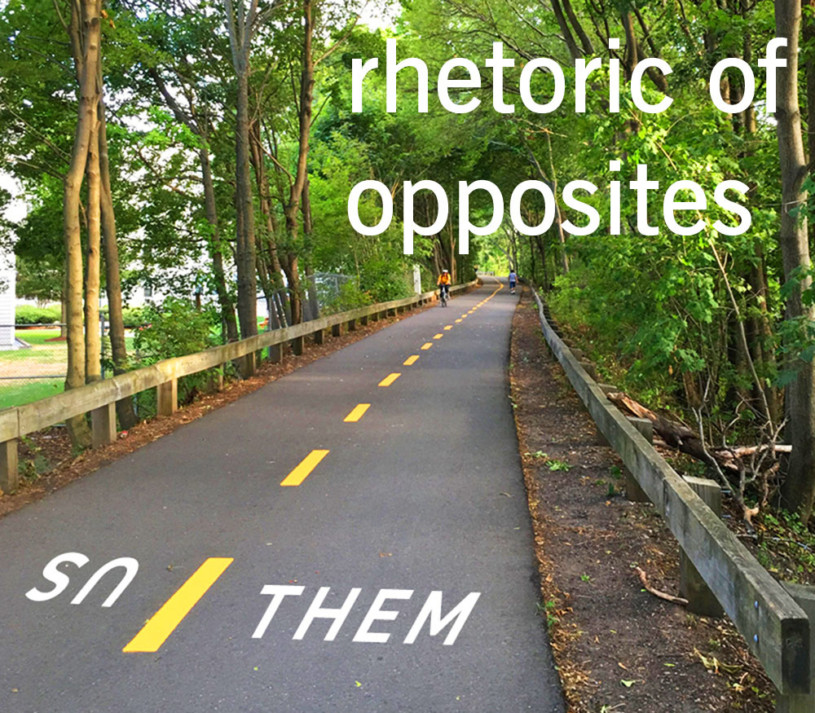 ARLINGTON, MA—In 25 pair of words, Nilou Moochhala has taken a stab on rhetoric of opposites—well onto the surface of the Minuteman bikeway. She calls it “the language of the street.”

Moochhala stenciled 25 pairs of words – for the 25 years since the Minuteman bikeway was founded. Her goal is to call attention to way language can divide people by polarizing perception and opinion.

What she calls “the rhetoric of opposites” eliminates the complex “middle” space where people find common ground and reach compromise.

“I wanted to examine the use of fearful and divisive rhetoric in the current political environment by juxtaposing pairs of opposite words along the bikeway,” Moochhala said in a statement. “With the inclusive/exclusive language that we are hearing nowadays, it is important to get the message of the value of diversity and inclusion out.”

The history and spatial setting of the Minuteman, which follows the same path of those who rode out to Concord and beyond during the American war of independence, seems a perfect setting to discuss the issues relevant today, she said.

“By bringing these words into the public space, I hope to challenge and transform bike path users’ experiences by encouraging them to think about where they come from and where they are going, in the context of their community, city, and larger world,” said Moochhala. “The installation builds on the way that traffic flows in two directions; the pairs of words sit alongside each other but face in opposite direction, legible from opposing perspectives.”

The project was sponsored and supported by 13FOREST Gallery, Arlington Public Art, and the Arlington Commission on Arts and Culture.