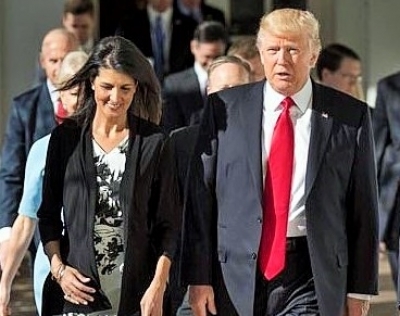 The former UN ambassador spoke to Fox News on Thursday evening, after the Guardian obtained a copy of Pompeo’s forthcoming memoir, “Never Give An Inch”, and reported his comments about Haley.

Haley resigned from the Trump administration in October 2018.

Before that, Pompeo says in the book that she set up a personal meeting with Trump in the Oval Office without checking with him.

Pompeo writes that John Kelly, then Trump’s chief of staff, thought Haley had in fact been accompanied by Ivanka Trump and Jared Kushner as they presented “a possible ‘Haley for Vice President’ option”, the Guardian reported.

Speaking to Fox News, Haley said: “I don’t know why he said it, but that’s exactly why I stayed out of DC as much as possible, to get away from the drama.”

She also pointed out that Pompeo says in his book he does not know if the story is true.

Haley and Pompeo are among possible contenders for the Republican presidential nomination in 2024, a contest in which Trump remains the only confirmed candidate, the Guardian reported.

But Haley seems set to run.

She told Fox News: “We are still working through things and we’ll figure it out. I’ve never lost a race. I said that then I still say that now. I’m not going to lose now.” (IANS)