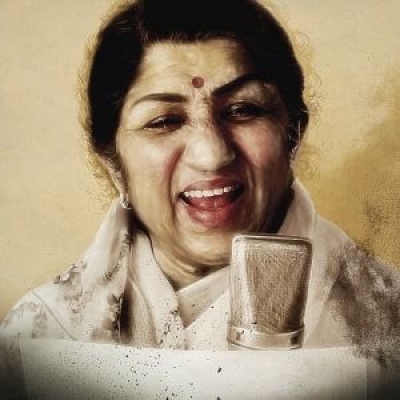 New Delhi– Hundreds and thousands of film songs in more than a dozen languages, ghazals, patriotic songs and also ‘bhav geet’, the quintessential semi-classical, non-filmi songs in Marathi, Lata Mangeshkar sang them all — but it was singing ‘abhangs’ that was closest to her heart.

Revered by the Maharashtrian populace the world over, but unknown to others, even to those who know her bhajans, ‘abhang’ — a-bhang, or ‘that which cannot be broken even by time’ — were a genre that allowed for the expression of her spiritual strength.

Abhangs are the traditional poems praising Maharashtra’s popular deity Vitthal by Sant Jnaneshwar, Tukaram, Namdev and Eknath, to name a few from Maharashtra’s robust bhakti tradition. These have survived for centuries as they have percolated into just about every socio-economic milieu.

What could have been restricted to those who love ‘sant sahitya’ (traditional religious literature), or to the ‘warkari sampradaya’, those who walk on foot every year to Pandharpur, was not just popularised among the masses by Lataji’s soulful renditions of these timeless compositions, but also immortalised for the world.

From among the scores of ‘abhangs’ that she sang, Lataji’s most popular collections are ‘Abhang Tukyache’ composed by musician Shriniwas Khale and those of Sant Jnaneshwar, composed by her brother and a great musician in his own right, Hrudaynath Mangeshkar.

“I have always been fascinated by ‘sant rachana’. when I read and listen to them, I experience bhava samadhi (trance) ï¿½ All saints called Vitthal as ‘maauli’ (mother). For me, both Vitthal and these saints are ‘maauli swaroop’ (mother-like), hence I am always so overwhelmed while singing these ‘rachanas’,” Lataji had said in her piece written for a Marathi daily in 2017.

As once explained by the late Ram Shewalkar, a great orator and writer from Maharashtra, especially in the bhakti tradition, one necessarily looks upon Vitthal as ‘mother’, and hence the terms ‘Vithu Maauli’, ‘Vitthal Maauli’ and even ‘Dnyaneshwar Maauli’ (‘maauli’ being a term of endearment for mother). This is unlike in the north, where mainly the Sufi tradition looks upon the Almighty as a lover, ‘mehbooba’.

Lata’s voice easily captured the intensity of devotion for Vithoba, and the passionate longing buried deep within Tukaram’s lines and the sweet nectar dripping from the ‘Jnaneshwari’ (the Bhagavad Gita’s philosophy rendered in popular Marathi by Sant Jnaneshwar).

Be it her lyrical excellence in Raag Yaman for ‘Sundar Te Dhyaan’, or the flute pieces intermingling with jal tarang resonating with her voice in ‘Runu Jhunu Re Bhramara’, or the shrill ring of temple bells with her intense ‘Are Are Dnyana Jhala Si Paavan’, or the her clear, distinctive voice singing the alliterations for syllable ‘L’, found only in languages south of Narmada, in a stanza of ï¿½Pail To Ge Kahu Kokatahe’, or the evergreen soothing ‘Mogara Phulala’, each of the deliveries showed why the ‘abhang’ genre was special not just to her, but her fandom too.

“The peculiarity of her singing is that it keeps the essence of the words alive without overpowering it with her singing,” said Sachchidanand Joshi, member-secretary, Indira Gandhi National Centre for Performing Arts (IGNCA), New Delhi.

“The sense of ‘shraddha’, ‘bhakti’ and ‘aastha’ can be seen distinctively in her abhang singing. Through her remarkable singing style, Lataji takes you to the era of the ‘abhangs’,” Joshi said.

“The extraordinary compositions of music directors such as Hrudaynath Mangeshkar and Shriniwas Khale reached the climax of divinity through Latajiss voice. She also maintained different styles of singing and used peculiar tones for different saints. That is why you get a different feeling when you hear ‘Sunder Te Dhyaan’ and ‘Vrukshvalli Aamha Soyari Vanchari’,” Joshi observed.

Terming her as the Goddess Saraswati personified, ‘Sarabhai vs. Sarabhai’ actor Sumeet Raghavan, who is also a singer and taken part in celebrity reality singing shows, judged a few of them, said: “Not just her Hindi and Marathi songs, her ‘Abhang Tukyache’ is a treat. One can play it anytime, on loop … sheer magic. The Mangeshkars and (Shriniwas) Khale Kaka have created landmark work, a different genre in entirety. It is an invaluable legacy.”

The actor, whose mother language is Tamil, but is every bit a Punekar seeped in all things Marathi, said: “Lata Didi is the lighthouse for our generation, the North Star. One can measure the deep impact that her ‘abhangs’ have left by the fact that even today several young participants in ‘Little Champs’ or ‘Sa Re Ga Ma Pa’ contests choose to sing ‘Sundar Te Dhyaan’.”

Lata had been bestowed scores of titles, starting with ‘Sangeet Samragni’ or ‘Gaan Kokila’. Those who have even once heard any of her ‘abhangs’ would agree with the title conferred on her by the Karveer Peeth Shankaracharya — ‘Swar Maauli’ — on the lines of ‘Vithu Mauli’ as Vitthal is known in Maharashtra’s bhakti tradition. (IANS)