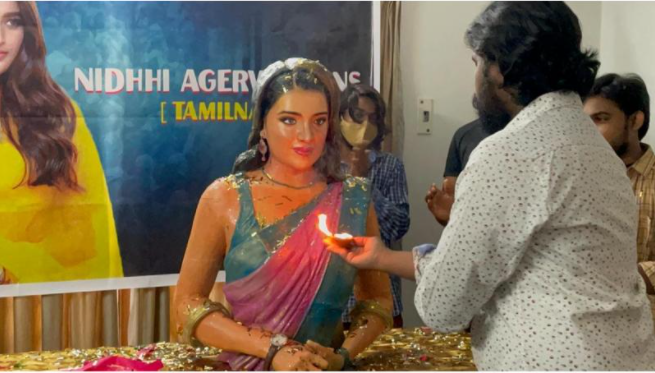 Chennai–Fans of Southern star Nidhhi Agerwal erected an idol of the actress to worship her on Valentines Day, in the Chennai suburb of Kattupakkam.

The actress says she was pleasantly “shocked” to know the news of the event that had the group of fans also performing ‘arati’ and a cake-cutting ceremony before her idol.

Nidhhi tells IANS: “I was extremely shocked and I never saw this coming. I think this is the best Valentine’s Day gift I have got and I have only and only so much love for my fans.”

The actress, who will soon be seen as the leading lady in Telugu superstar Pawan Kalyan’s untitled next, feels that the gesture encourages her to give better films to her fans.

“It feels overwhelming,” she says, adding: “I just want to thank them and tell my fans that I will give good films and content and this encourages me more to do better work and give them good movies,” says the actress, who made her debut in the 2017 Bollywood film “Munna Michael” opposite Tiger Shroff, before finding success in the South. (IANS)