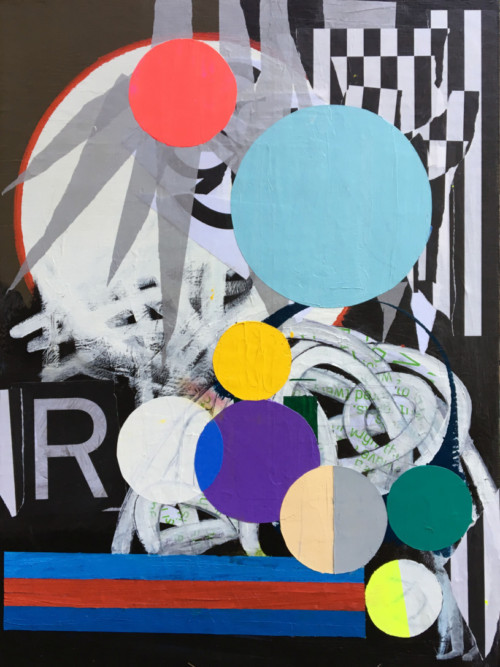 BOSTON– Boston Children’s Museum has announced it will open a new gallery exhibit, “Co-Co-Collabo,” by Boston artist Cyrille Conan. Conan will exhibit two site-specific murals which have been influenced by parenthood. One mural will be inspired by collage collaborations he has made with his three-year-old daughter, Colibri Jimenez-Conan.

In a time when resources for the arts, humanities and nature are in flux, Cyrille expresses that as a parent, he needs to instill in his daughter the importance of being in nature and expressing creativity.  “I see my painting practice as an anchor to keep me connected to truth and nature,” said Conan. “I consider the intuitive approach as the best way to parallel my own nature and mirror my frame of mind.”

Conan has been developing a vocabulary of mark making, collage, and textures to allow the experience of creating the murals to be as honest and intuitive as possible.  Each layer informs and dictates the final composition until he finds a visual balance of form, color and repetition.

Building on past installations by Eve Ewing and Joanna Tam, Conan’s site-specific installation creates a direct channel between contemporary artists and children.  By creating an immersive, yet durable, installation, “Co-Co-Collabo” provides opportunities that inspire and broaden a child’s developing notion of what it means to be part of nature, a creative being, and an artist.

Conan is a French born, New York City native.  He earned his BFA in Painting from the Hartford Art School before planting his roots in Boston. While his primary practice is still painting, he works in a variety of mediums and scales.

Cyrille has produced site-specific installations and murals in numerous states as well as local galleries and public spaces in Boston, including The Cyclorama, The MFA/Boston and City Hall.