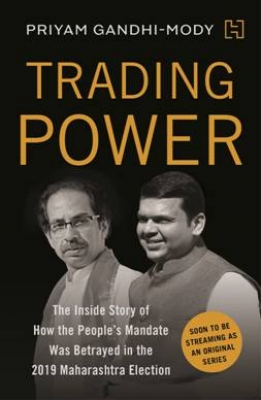 New Delhi– In October 2019, the Assembly elections held in Maharashtra saw a decisive mandate in favour of the pre-poll Mahayuti alliance of the Bharatiya Janata Party (BJP) and the Shiv Sena, against the Maha-agahdi alliance of the Nationalist Congress Party and the Indian National Congress. But what followed shook the very foundations of democracy in the state, as Priyam Gandhi-Mody relates in “Trading Power” (Hachette).

With the Shiv Sena unexpectedly staking claim to the Chief Minister’s post, and the BJP unwilling to give in to its ally’s demand, the battle for the coveted top spot began in earnest.

As President’s Rule was imposed, heavy backdoor politicking commenced and the four parties in the fray tried frantically to establish post-poll partnerships to be able to form government. Featuring swiftly shifting alliances, the abandonment of long-held party ideologies, dynastic bombast and overnight reversals, more than a month of high-octane drama culminated in Uddhav Thackeray of the Shiv Sena taking oath as chief minister of Maharashtra on November 28, 2019.

The BJP – the single-largest party in the legislature, with almost double the seats of the second-in-line Shiv Sena – found itself sidelined and left out of power.

Recounting in dramatic detail the behind-the-scenes negotiations and renegotiations in the high-stakes battle for political control of India’s financial capital, “Trading Power” throws into sharp focus the manipulations, manoeuvres and narrow motivations that rule politics in the country today, ultimately leading to a gross betrayal of the people’s mandate.

Priyam Gandhi-Mody is a strategist specializing in political advocacy and brand building. An advanced understanding of state affairs and a tenacious ability to build high-profile networks enable her to implement effective political communication strategies. While she is happy to be politicking, she ensures that she finds time to write, especially about her unique experiences and the interesting people she encounters in her profession. (IANS)