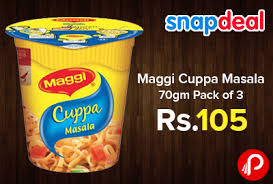 The FMCG major said it has added two new variants to the Maggi Noodles portfolio — ‘Maggi Hot Heads’ and ‘Maggi No Onion No Garlic Masala’.

According to Suresh Narayanan, Chairman and Managing Director, Nestle India, Maggi Noodles has regained its leadership in the hearts and minds of the Indian consumer.

“It has been the consistent and abiding passion at Nestle to marry the benefits of our extensive knowledge of flavours, technology and the science of nutrition with the tastes and experiences that delight our consumers,” Narayanan said.

“Maggi Hot Heads, Maggi Cuppa and Maggi No Onion No Garlic Masala are result of this passion and determination which we are pleased to offer,” he said.

The FMCG company stated that ‘Maggi Hotheads Noodles’, which is a new sub-brand under Maggi Noodles specifically targeted at those who enjoy spicy food, will be available in four flavours with differential spice levels and for a price ranging between Rs 20 and Rs 22 for a 71 gm pack.

The ‘Maggi No Onion No Garlic Masala Noodles’, priced at Rs 15 for a 70 gm pack, will cater to consumers preferring food without onion and garlic, and will be available initially in Gujarat, Mumbai and Katra.

The company further said it has partnered with online marketplace Snapdeal for an online sale of all these variants.