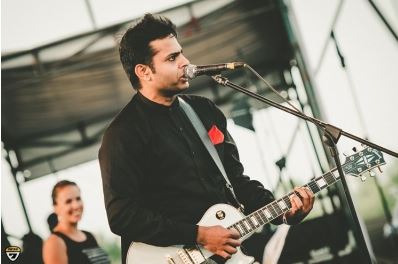 Hyderabad–Its the music and not the lyrics which attract the attention of listeners, feels Indian rock singer and musician Alluri, who has taken Telugu to the international music stage with lyrics in his mother tongue.

He believes the lyrics in Telugu will not come in the way of reaching international audiences. “Very often, when you listen to a song, you may pay attention to the first two lines. After that you don’t really know the lyrics,” the young Hyderabadi told IANS in an interview.

“Though lyrics have a part to play as they make the song much better, fundamentally it is the music which people listen to,” he said. The musician personally likes lyrics and has written songs in Telugu.

The artiste, who was born in Hyderabad but grew up and resides in London, composes his own music, writes lyrics and sings and plays the guitar.

Though he started with English songs, he soon realised that he was more comfortable in expressing his emotions in his mother tongue.

“I felt like writing songs in Telugu. It’s all to do with who I am. I have lived abroad for many years and have lost touch with Telugu.

“But I missed Telugu. I felt I couldn’t share my songs with people back home. I automatically felt like writing in Telugu and I wrote. It has all to do with my identity and my enjoying music,” said the musician, who earlier this month performed at the Trans Musicales Festival in France.

Alluri, who is the first known Telugu musician to have earned international recognition through his rock albums, was recently in his home town for a media preview of his new Telugu rock album music, along with his band of Italian musicians. The album is scheduled to be released in 2018.

Alluri’s debut album was “Man of truth” recorded at Brighton’s Electric Studios in the UK last year. This was followed by his first Telugu song “Evari kosam (For whose sake)”, which was released on prominent independent record label Killing Moon.

He teamed up with producer/mixer Tommasso Colliva and Italian musician Massimo Martelotta for the second Telugu song, “Endukala (Lovers no more)”.

Alluri, along with other artists, also performed at The Cambridge Folk Festival.

After the performance in France, he was in Pune for his second NH7 Weekender Festival. He also enthralled live music lovers in Hyderabad and Bengaluru this month.

He believes language is no barrier and his audiences are people who enjoy live music. “In the West, people often go for live music shows. It is part of their culture. There, people are used to listening to English music and bands from West, but they also want something different.”

“I try to enjoy my shows as much as possible. France was a lot of fun. In Europe, France and Germany have a healthy music scene; people really love to go out and listen to live music. Hopefully, I will get to play more there,” said Alluri.

Alluri took to classical music at an early age. He was 12 when he asked his father to buy him a guitar. He used to play cover songs and songs of other bands. About five years ago, he started writing his own music.

For Alluri, live music will continue to be the main focus, especially as is not too keen on films. “It is totally a different aesthetic — making music, playing it live and writing songs. It’s not about films, but about what you want to write. When you write films, it is limited to the story or director’s vision, but here you have more freedom to explore different topics. I enjoy writing about different things… like about childhood. I like the freedom I get here,” he added. (IANS)