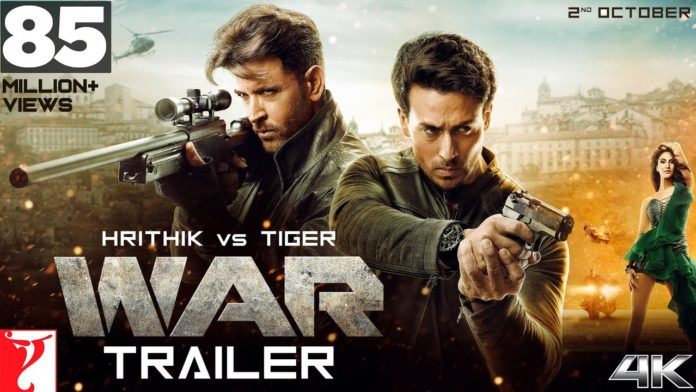 Strictly speaking, “War” is not a film. It is a smart product manufactured to gyp you with hardsell, tempt you to splurge on the multiplex tickets in a festive season when the spirit of indulgence runs high. “War” was always about a catchy title, and about crafting a set of irresistible teasers that promised two of the industry’s hunkiest heroes in full-on action mode, at some of the most gorgeous locations across the planet.

They spent hundreds of crores all of the above. Who needs an engaging story?

I know what you are thinking. Commercial products as “War” are never meant to be about engaging story. Bollywood would rush to defend such ridiculous filmmaking as dutiful efforts to deliver ‘entertainment, entertainment and entertainment’. The operative word used to defend such stuff is ‘timepass’.

With “War”, however, that is precisely where things go all wrong. Despite the hype and hoopla it has arrived with, there is very little entertainment in the film. Time simply doesn’t pass. “War” could have been named “Bore”.

For obvious reasons of commerce, the saleable package is entirely set up around the film’s two heroes – Hrithik Roshan and Tiger Shroff – reducing everything and everyone else including heroine and villains to essential props.

An excuse of a screenplay (Shridhar Raghavan and Siddharth Anand) is set up to insert those standard Hollywood-rehashed action scenes. A parkour sequence somewhere reminds you of Daniel Craig in “Casino Royale” – which looked so glorious all those years ago in 2006. A bike chase is a clean rip-off from Tom Cruise’s “Mission Impossible” stock. Half a dozen tired cliches used to carry forward the action could set you on a guessing game as to which Hollywood flick you last saw it.

All this is ceremoniously packaged with mandatory mentions of ‘gaddaars’ and ‘deskhbhakti’, since the story is about the Indian intelligence and national security (yes, there is the mandatory high-importance hard drive that everyone is after, because it contains vital info that could jeopardise the country’s safety).

The script credited to Aditya Chopra and Siddharth Anand introduces Hrithik as a rogue agent named Kabir who, at the start of the film, has apparently turned against the nation. He is assigned to eliminate a top terrorist, instead he guns down a high-ranking official of the Indian secret service. Kabir’s onetime protege Khalid (Tiger Shroff) takes on the mission to track him down, with orders to shoot him on sight.

Much of the first half is wasted in establishing their back stories, serving up very little action, much lesser thriller quotient, and almost no plot progression that may catch you by surprise. For most parts, oscillating between flashback and present day setting, the film hangs on to a one-point question – why is Kabir killing people who are considered honourable by India?

And while you could guess the answer to that one long before the film finally, lazily serves it, you go into the second half hoping some solid action will make up for the dead early portion.

Sadly, a snailpaced narrative goes through the predictable motions post interval, before the stage is set for what you paid to watch – Hrithik and Tiger squaring off against each other in an all-important climax showdown.

The climax action is an outcome of a ludicrous plot twist, involving an outrageously unimaginative subtext about plastic surgery. Still, despite its sheer silliness, the twist would seem like the only original thing about “War”.

The action climax, which the final twist lets Hrithik and Tiger engage in, is sadly a throwback of standard stunt scenes that looked spectacular in Hollywood movies of the nineties. Long before the Hrithik-versus-Tiger fight draws to its predictable end, a lot of the audience was actually heading for the exit.

Just as it was never meant to be a film in the strictest sense, “War” was also never meant to be about acting skills. Hrithik and Tiger were never really required to act in this film – they were required to pose, strut and unleash the swag, and they do all of it with gusto. If “War” was always about its leading men, the duo manages to deliver some thunder in this piece of absolute blunder.

Go for “War” only if you root for Hrithik and/or Tiger. (IANS)