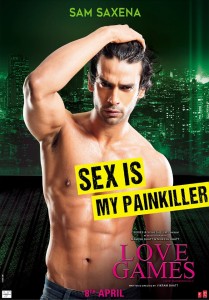 The plot revolves around a nymphomaniac widow, Ramona (Patralekha), her ‘toyboy’ Sameer Saxena aka Sam (Gaurav Arora), a businessman’s son and his love interest Alisha Asthana, an abused wife of a lawyer.

High on drugs and to induce some excitement into her sex life with Sam, Ramona devises a scheme based on a novel that she had read, “Love Games”. The rules are simple. At any party, they would have to spot a couple who are in love, then each one of them must get close to the partner of the opposite sex and try to bed them. Whoever seduces their target first, is the winner and the loser will have to supply the winner with drugs for one year.

The games, which begin as an experiment for exhilaration, gradually turn into dangerous liaisons of terrifying proportions, as the rules too change in order to boost the adrenaline rush.

The performances by the lead cast are by far good. Patralekha as Ramona nails her character to perfection. With her poise, demeanour and defiance, she renders a zesty performance with oodles of spontaneity and panache.

Portraying his angst and resentment, in an understated manner, Gaurav Arora as Sam, the guy torn between two women and with suicidal tendencies, is sincere.

Tara Alisha Berry as Alisha Asthana, the traumatised doctor wife of a leading Lawyer, living on painkillers is simply appealing.

The dialogues too are unintentionally funny and are packed with some interestingly novel similes and metaphors. It is amusing to hear Ramona tell Sam: “You are like a fire brigade, you only come during an emergency.”

The songs are typical pub numbers and they go with the flow of the narration.

Overall, the film has sleek production values and, though frothy, it is a decent adult film.