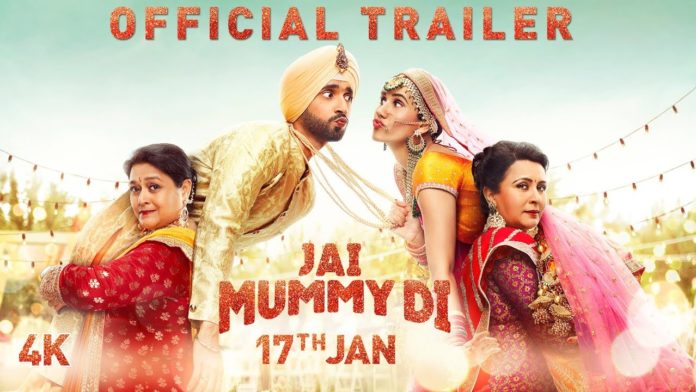 The keyword here is ‘Mummy’, so they needed to come up with a cracker of a mother figure to bring alive the gig. “Jai Mummy Di”, as the posters and promos grandly announced, serves up not one but two mummyjis for the sake of its plot. With veterans Supriya Pathak and Poonam Dhillon playing out the mummyjis, you’d think very little can possibly go wrong.

Well, nearly everything goes wrong. A rom-com feature with the imagination quotient of an amateur play manages to be neither romantic nor comic. Writer-director Navjot Gulati, who makes his full-length feature debut with this film, settles for hackneyed tropes to carry forward his tale. The script calls for loud acting from the said mummyjis, and a jaded romance/ melodrama/ naach-gaana routine on the part of the film’s young lovers, essayed by Sunny Singh and Sonnalli Seygall.

The glaring glitch is the film’s lack of genuine laugh-out-loud moments. The narrative could at least have done with a few smart oneliners. The dialogues, like almost everything else about this film, are loaded with cliches.

The film operates with a very basic plot. It is about a couple of young lovers who belong to families that are not exactly on amicable terms. While this formula has virtually defines the standard Bollywood love story forever, “Jai Mummy Di” tries giving it the ‘mummy spin’. Saanjh (Sonnalli) and Puneet (Sunny) maybe next-door neighbours who have been lovers since high school, but their mothers — Pinky (Poonam Dhillon) and Laali (Supriya Pathak) — are locked in eternal loathing and a war of upmanship.

Moving into the second half, as the minutes pass you rapidly realise writer-director Gulati and his creative team have run out of ideas on setting up an unusual storyline or arriving at a satisfactory conclusion. It doesn’t help that most of the runtime banks on lazy storytelling. It is the reason why, despite clocking just around 140 minutes, the film fails to hold attention.

“Jai Mummy Di” is positioned as a ‘Delhi film’, riding a Delhi-NCR backdrop like a lot of Bollywood releases in recent times. The sights and sounds of the national capital region are naturally abundantly spread all through — you get the mandatory Connaught Place shots and some Metro Rail line vignettes in long shot too. There is the odd catty quip about “Karol Bagh ka Manish Malhotra” and a whole lot of characters speak Hindi with a Punjabi twang. Sadly, the screenplay fails to incorporate Delhi’s trademark sense of humour.

What’s more disheartening to see is how the veterans, Poonam Dhillon and Supriya Pathak, struggle to emerge beyond the gaudy Punjabi parodies they are given to act out. Both these actresses were returning to the screen with prominent roles after quite some time, they deserved a better deal.

Sonnalli Seygall’s Saanjh and Sunny Singh’s Puneet are positioned as the alpha female and her shy loverboy respectively. One would expect an odd sort of chemistry to fly, but that never happens — mostly because the writing is weak, but also because the lead pair tries too hard while acting out their roles.

“Jai Mummy Di” remains funny in fits for a while before losing the plot altogether. Not quite the joyride one would recommend for a weekend’s mall crawl binge. (IANS)