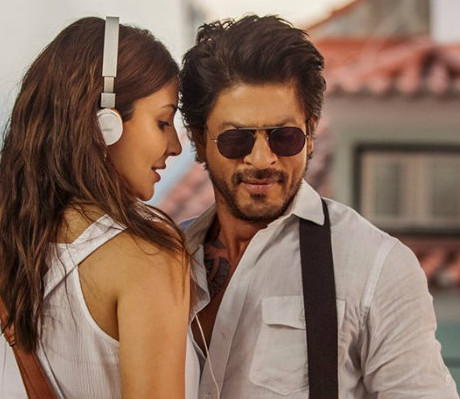 If the flop-ridden Hindi film industry had its hopes pinned on the new Shah Rukh Khan starrer for salvation, then it’s time to unpin those hopes.

Imtiaz Ali’s eagerly awaited “Jab Harry Met Sejal” is a lengthy, lumbering, baggy and pointless love story. As lengthy and lumbering as his earlier “Tamasha” where two grown-up individuals behaved like a bratty unpleasant couple on a reality show pretending to be people they were not.

Just imagine if Ranbir Kapoor and Deepika Padukone met again in an exotic land and decided to play….ummm… a cranky closet-misogynist tourist guide and a fast-taking vacuous but charming Gujarati tourist.

Well, no. Not really. Shah Rukh’s Harry, with his unabashed cheesiness and ‘cheapness’, plays his part with an arrogant aplomb that seems borrowed from his superstar persona of Aryan Khanna in Maneesh Sharma’s “Fan”. Here is a man who will do what he wants, say what he wishes and apply any logic no matter how politically indecorous, to prove his point.

And we are meant to listen in, because… well, it is Shah Rukh Khan. Anushka Sharma, showing an impressive ability to stay calm and still while her co-star lets off spleen all over the place, does a good of job trying to make some sense of her co-star’s tantrums. Frankly, Sejal has more patience than we do.

It’s hard for us to tolerate her mulish determination and his cynical deportment. These two are made for each other. Our best wishes.

Imtiaz Ali has been repeatedly remaking his first film “Socha Na Tha” in various geo-political and socio-cultural permutations, exploring the gender dynamics in relationships where the woman is aggressively self-assertive while the man careens between self-loathing and borderline misogyny that comes from a broken heart or excessive sex.

As they travel across Europe looking for Sejal’s missing ring (why is the ring so vital to her life?), Harry insists in telling her he has been… errr… sleeping around, that he is cheap and he just may make her a target of his cheapness. Sejal, who couldn’t care less to begin with, soon begins to enjoy the thought of being given more a passing excursion into unknown lands by her rude tourist guide.

What followed was a sell-out. In Imtiaz’s earlier films, the couple explored the Indian hinterland in pursuit of an emotional and spiritual identity. “Rockstar” onwards, they began travelling to exotic foreign locations for no other reason except that the director could afford them.

“Jab Harry Met Sejal” is all over the place, literally. It takes us to Prague, Budapest and what-not. But fails to justify its roving eye. The emotional journey is just as messy and unconvincing.

It’s hard for the audience to invest their emotions in these two self-absorbed cynics who think travelling together is a sign from above for an incongruous bumpy togetherness filled with rage and, yes, atonal songs lip-synced so indifferently by Shah Rukh as though to tell us, “Look, guys, I know and you know that I am not really singing these songs.”

The same sort of freewheeling flippancy is applied to the ersatz emotions that spill out through dialogues which impose a mellowness and maturity on what is essentially romantic raillery between two high school students, one of whom is rich arrogant and stubborn, and the other is arrogant and stubborn no matter what his social standing, because, well, he is Shah Rukh Khan.

“Jab Harry Met Sejal” has a few genuinely ‘cool’ encounters between the lovers. But these are too spaced out and too far in-between to engage us in the couple’s destined marriage. What clutters the corridors of this posh-looking touristic ‘vilaayat-darshan’ are the winking flirty exchanges which lead nowhere.

A big disappointment for both the fans of Shah Rukh Khan and Imtiaz Ali.

They both need to think about what to do next. In separate rooms, please. (IANS)