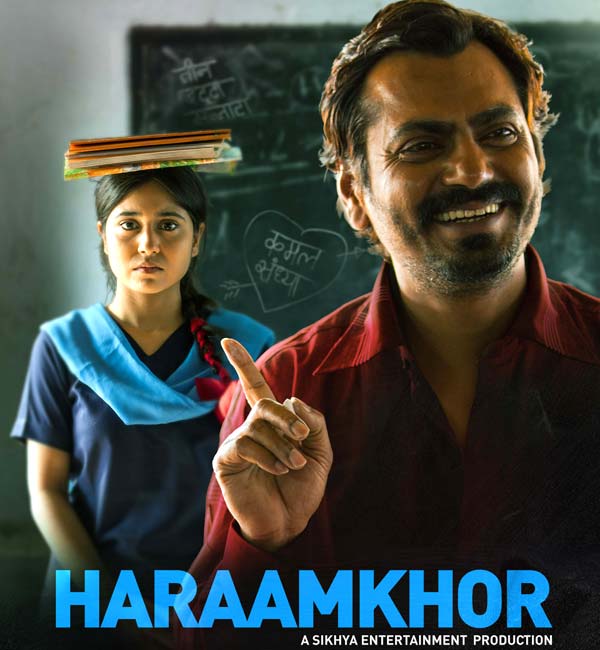 She is 15, going on 18. Or so she claims when the local female doctor examines her for missing her period. At her age, she should be only thinking of the periods that she must not miss when the bell rings. But no. Sandhya is about to be seduced by her sleazy teacher.

In what perhaps ranks as the most below-the-belt male protagonist in recent times, Siddiqui is cast as a small-town school teacher with a serious hormonal imbalance and a disgusting lack of moral grounding. While he has a very fulfilling physical relationship with his wife Sunita (Trimala Adhikari) at home, he inches his way up the salwar (there is no polite way of putting this) of his student, Sandhya (Shweta).

A mere child, if you look at it with dispassionate eyes. And that’s how debutant director Shlok Sharma wants us to look at Shweta Tripathi who is an absolute natural as a mofussil ingénue, not quite unaware of the effect her presence has on her ever-horny teacher, but not quite the seductress either.

Let’s put it this way. She is Lolita without the seductive oomph. Nawazuddin’s Shyam Tekchand is cunning, slimy, self-seeking and unscrupulous. He is so self-serving that he looks ridiculous even in his obscenity. And yet Nawaz brings a certain innocence to the character that is hard to define, as though he can’t fathom he is so leery about his students. Or why he beats up girl students outside the classroom just to get even with Sandhya.

If Nawaz’s Raghu Raman’s sharp blunt tool causing grievous injury were in his pants, he would be Shyam Tekchand.

The real challenge for first-time director Shlok Sharma is to create a palatable paradigm for us to watch these characters trapped in an inherently murky situation. Shlok brings in two young boys — Kamal (Irfan Khan) and Mintu(Mohd Samad) — whose innocent voyeurism gives to the nudge-nudge-wink-wink narrative a kind of unbridled ratification to Nawazuddin’s socially unacceptable utterly reprehensible conduct.

Much of this devil-may-care film’s warm small town humour comes from the two boys’ responses to the ‘Kallu’ teacher’s behaviour with the ‘Gori’ student. The narrative weaves in and out of the two sets of characters’ lives — the two young friends and the deplorably mismatched lovers — with a kind of brisk all-knowing trot that knows it’s treading a dangerous path but is adventurous enough to risk the abyss that lies ahead.

There is yet another perspective provided by another illicit relationship that runs through the film between Sandhya’s father Raghuvir (Harish Khanna) and his lady friend Neelu, played by an absolutely natural non-actress Shreya Shah who fills every frame with an unconditional positivity. The absence of sleaze in this relationship again gives us a comforting counterview into a zone where the forbidden need not be unforgivable.

Neelu’s burgeoning friendship with Sandhya is detailed in just a few strongly written scenes where empathy flows unhampered. And what a refreshing departure Sandhya’s father Raghuvir is from the loutish policemen we see in realistic cinema. Though he gets drunk every night and has a mistress, he is kind and considerate. There is a sequence in a restaurant where he invites his daughter’s shy, frightened friend to join them for the meal.

The scene kills you with kindness.

It is this absence of straitjacketed characters and a refusal to let the people who populate the dusty town in the pre-cellphone era off the hook, that lend a kind of provocative intrigue to the proceedings, even when towards the finale, the plot spins out of control to create a dark, brooding tragedy that mocks the every essence of existence in such back-of-the-beyond places where survival is never about the best options.

See “Haraamkhor” for its original and audacious content and for the way the debutant director extracts a gush of empathy from these bored characters even during their worst moments. Love, we always knew, as redemptive. But lust needn’t be all that bad either. (IANS)