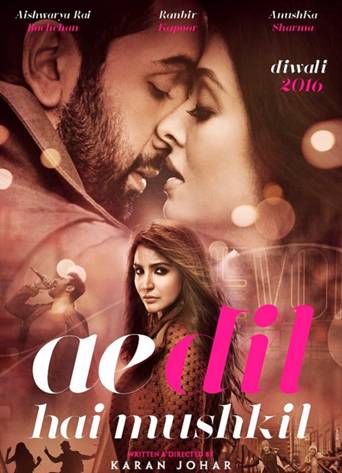 Let’s get this straight. Karan Johar loves his films to look beautiful. He works towards gleaming, polishing and grooming his locations and actors as though he were building a Taj Mahal for the Gen-Y to rest its reposeful romanticism.

“Ae Dil Hai Mushkil” (ADHM) is one good-looking film with actors who epitomize human beauty. True, they strive helplessly towards reaching the inner core of their being to obtain a spiritual centre to match that abundance of physical beauty.

That synchronized connectivity between inner and outer beauty, escapes the filmmaker as well as his characters who are heard mouthing some beautiful poetry that seems ordered online. 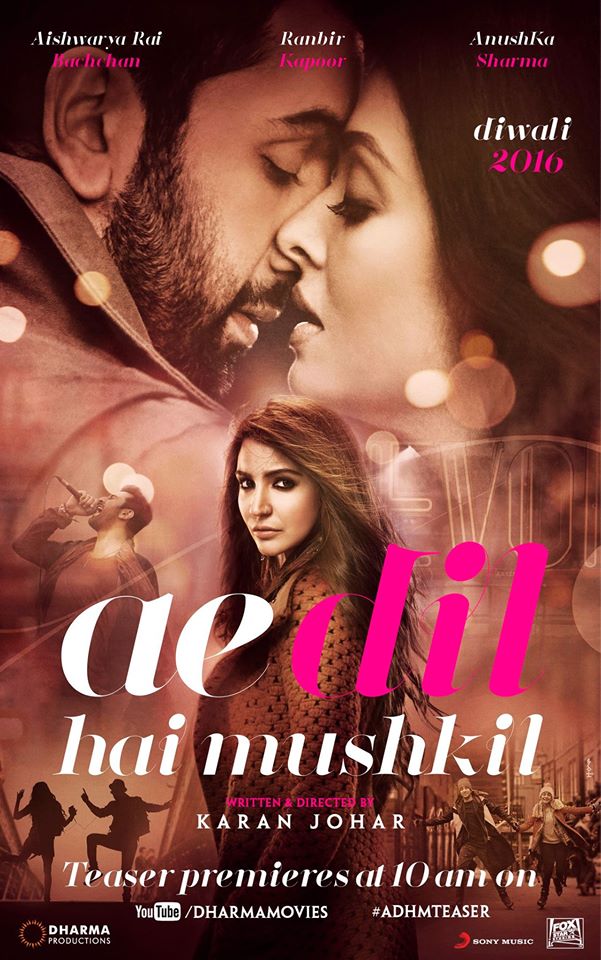 It’s all very designer-designer in ADHM. You know, like kitchen interior and living room walls in a home decoration magazine. But nonetheless pretty to look at and enormously gratifying for the high level of visual aesthetics that Karan invests into his frames. Full marks to cinematographer Anil Mehta for shooting Karan’s location and actors with an intensity that frequently betrays their shallow interests in life.

Though there are four pivotal characters in the capricious quadrangle, the focus is entirely on Ranbir and Anuskha who seem determined to make a tamasha out of their togetherness. And I do mean that literally. If Imtiaz Ali’s “Tamasha” had paired Anushka with Ranbir, this would have been what “Tamasha” would have looked like. Thank the casting director, Deepika Padukone.

Ranbir and Anushka in a no-brainer mode whoop it up like two kids at a theme birthday party blowing up condoms in the mistaken belief that they are balloons. Not that Karan’s vision would allow even a nip of non-vegetarianism. ADHM is an exceedingly pure take on love, of the unreciprocated kind.

They have a lot of fun together and are constantly exploring the wild juvenile side to their personality. But she finds him to be just friendship material. Now what was that Deepika film where Imran Khan faced the same crisis of credibility. Ah yes, “Break Ke Baad”.

You will spot a likeness to many recent romcoms including Karan Johar’s own “Kabhi Alvida Naa Kehna” in this mish-mash of maudlin emotions and mushy poetry. By the time Fawad Khan saunters in as Anushka’s object of adoration, we are physically exhausted by the juvenile antics of the Ranbir-Anushka pair.

While Ranbir behaves like the guy from “Barfi!” fused with the dude from “Tamasha”, both cloned into the angst-ridden singer in “Rockstar”, Anushka’s chirpy high-octave act is doomed into self destruction but salvaged by her spontaneity. Surely, she can do better than get typecast as the new avatar of Preity Zinta.

Fawad’s entry is welcome and his exit baffling. Why does he reject Anushka’s love? If you are a Fawad fan, his meager presence and sketchy role would infuriate you. There is a paucity of Aishwarya Rai Bachchan also in the plot. She looks svelte and extremely fetching. And her character spouts poetry with arresting allure. But her presence in Ranbir’s Ayaan’s life is never ratified beyond a scratch-level attraction.

It is not that these characters are not capable of deep-level breathing. It’s only the director who keeps them afloat on the surface of a very blue, very tranquil, very scenic ocean. The scenic invariably overpowers the cynic in Karan Johar’s cinema. He loves the good things in life and dislikes the thought of the make-up being washed by tears of desolation.

Consequently, we see the characters in ADHM not as individuals but an amalgamation of the surface beauty that Karan accumulates in his vision and invests on the screen in the hope that the audience finds a centre to the placid conflicts.

That is not to be.

By the time ADHM gets into a full-on “Devdas” mode, we are in no mood for tragedy. But what to do? Karan Johar won’t let his characters enjoy their self-inflicted pain without a pay-off. These people love the good life and must pay a price for it.

Ranbir is adept at exhibiting designer-angst. But his feelings for the ‘heartless’ woman never rises beyond youthful desire. At heart, he remains a philistine who thinks Mohammed Rafi cried rather than sang. “Ae dil hai mushkil jeena yahan…” (IANS)