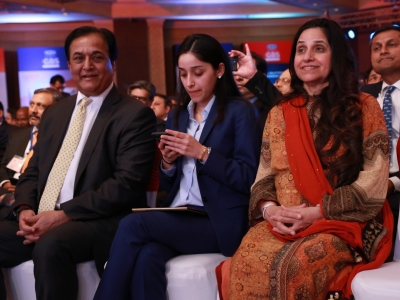 Multiple teams of the central probe agency carried out searches at the residence and office of Kapoor, his wife Bindu in Mumbai, and the company Bliss Abode, offices of Avantha Realty and Indiabulls Housing Finance Limited in Delhi and NCR.

However, Indiabulls Housing FInance in a statement said that no raid of CBI has happened on Indiabulls Group or any of its offices. “The CBI raids have happened on Yes Bank or Rana Kapoor who have their offices in Indiabulls Finance Centre complex in the capacity of a tenant,” the statement read.

The CBI in its FIR alleged that Kapoor obtained illegal gratification in the form of a property in a prime location in New Delhi at much less than the realisable market value belonging to Avantha Realty Limited (ARL), for a loan taken by it from the Yes Bank for extending concessions in the already existing credits provided to Avantha Group and for advancing additional loans.

The CBI further alleged that Kapoor, his wife Bindu, also a director of the Bliss Abode Private Limited (BAPL) and Thapar, promoter of Avantha Group companies entered into a criminal conspiracy for the purpose of obtaining the “illegal gratification”.

The CBI FIR said that Kapoor bought the prime bungalow at Rs 378 crore, paying through BAPL, and the property was immediately mortgaged to Indiabulls Housing Finance Limited for a loan of Rs 685 crore — which was Rs 307 less than the market price.

The CBI further alleged that the transaction shows that BAPL paid much less than the market value to Avantha group for alleged relaxation in other existing loans to the group companies and for advancing new and additional loans.

According to the CBI FIR, the Avantha Holding Ltd (AHL) had obtained credit facilities from ICICI Bank Ltd and Development Credit Bank (DBC) against collateral security of the 40, Amrita Shergill Marg 1.02 acre property in Delhi. The property was owned by ARL and according to the ICICI loan books, the property valuation was done at Rs 550 crore.

The CBI FIR said that the property was under mortgage with ICICI Bank, which was released in favour of Yes Bank through a loan of Rs 400 crore given to Avantha Realty. A senior CBI official said that the bank had sanctioned the loan in 2016 as lease rental, discounting for 10 years against a farce lease rental agreement entered between Avantha Realty and its another group company BILT Graphics Paper Pvt Ltd.

The official further stated that the agreement between Avantha Realty and BILT was “farcical” as the rental value was increased from Rs one crore annually to Rs 65 crore without any basis.

The official also alleged that at the time of sanctioning the loan, ARL was clearly under stress and not eligible for this loan as it already had an outstanding liabilities of Rs 690 crore and Rs 643 crore with the Yes Bank. (IANS)