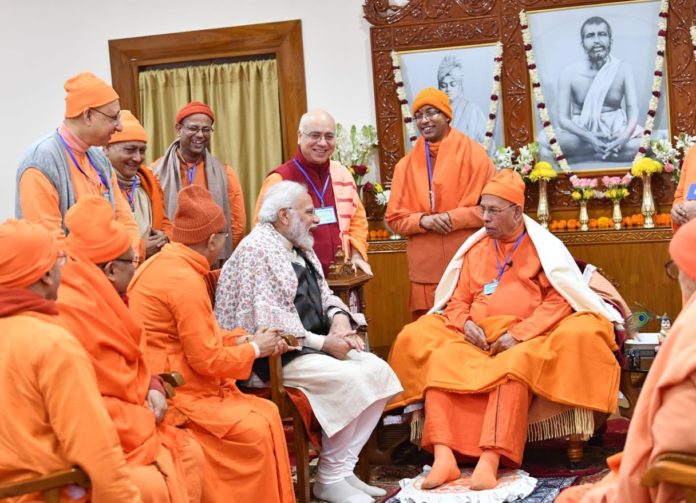 Kolkata– Prime Minister Narendra Modi, who arrived in the city on Saturday, spent the night at Belur Math – global headquarters of the Ramakrishna Math and Ramakrishna Mission – in neighbouring Howrah district.

The Prime Minister, who had in his youth wanted to become an ascetic of the Ramakrishna Mission, but was asked by its former President Swami Atwasthananda to concentrate on jana seva (public service) instead, himself expressed a desire to spend the night at Belur Math.

He has been put up in the international guest house ar Belur Math, which was turned into a fortress with SPG and state police personnel swarming over the area.

He was served prasad (food offered to god) comprising five fried dishes, luchi, rice pudding, sweets and fruits after he arrived there riding a launch on the river Ganges..

This is Modi’s second visit to Belur Math after becoming prime minister.

On May 10, 2015, a “deeply emotional” Modi had spent a few morning hours at the Math, praying and meditating.

He had then meditated at ascetic-philosopher Swami Vivekananda’s bedroom, which was specially opened at his request.

On Saturday morning, Modi tweeted: “I am excited to be in West Bengal today and tomorrow. I am delighted to be spending time at the Ramakrishna Mission and that too when we mark Swami Vivekananda’s Jayanti. There is something special about that place.”

According to RKM sources, he met the order’s president Swami Sharananada.

On Sunday morning, Modi will participate in the brahmaarti and spent time with the seers before going to Netaji Indoor stadium for attending the sesquicentenary celebrations of Kolkata Port Trust.

He will return to Delhi after the programme. (IANS)