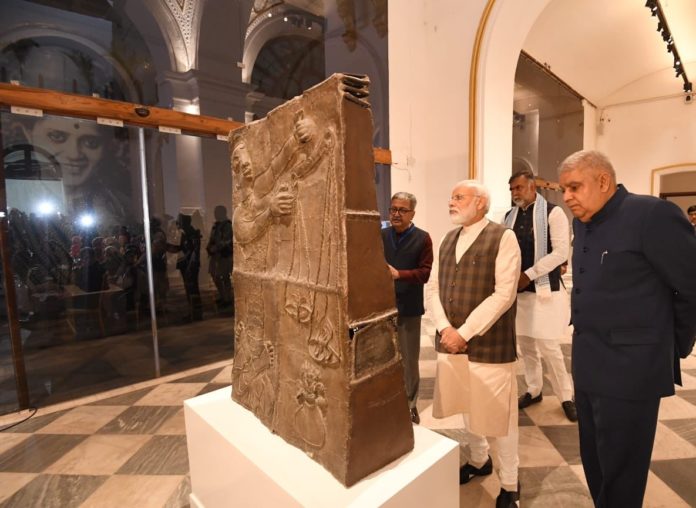 Kolkata– The Centre has decided to make five iconic museums of the country as per international standards, Prime Minister Narendra Modi said here on Saturday.

“It has been decided to make the five iconic museums in the country as per international standards,” Modi said after dedicating to the nation four heritage buildings which have been renovated and refurbished.

The project is s being launched with the Indian Museum, one of the oldest museums in the world.

Apart from it, the Delhi, Chenani, Hyderabad and Srinagar museums are also being upgraded, the Prime Minister said, stressing the need for beautification and renovation of the country’s iconic structures.

Underscoring the importance of creating the required resources for these museums’ maintenance and management, he said the government was considering establishment of the Indian Institute of Heritage Conservation and giving it a deemed university status.

“We are also considering developing the Indian government’s mint here into a museum of coinage and commerce,” Modi said during his address at the function organised in the OId Currency Builing, one of the four renovated heritage structures.

The other three are Belvedere House, Metcalfe House and Victoria Memorial Hall.

The renovation has been undertaken by the Union Culture Ministry which has refurbished the iconic galleries with new exhibitions apart from curating the old galleries.

The renovation exercise is part of the ministry’s initiative to develop cultural spaces around iconic buildings in various metro cities in the country. To begin with the cities of Kolkata, Delhi, Mumbai, Ahmedabad and Varanasi are being taken up under this project.

Modi said from time to time, the subject of making Belvedere House a Museum of the World has cropped up.

“Now our efforts are in the direction of realisation of dream.”

The Prime Minister said it was not proper that two of the five galleries of Victoria Memorial Hall were shut for long.

“For some time efforts are on to open them. My appeal is the third gallery should have place for the freedom movement in Bengal”.

He said a museum called Biplabi Bharat will be made in which freedom fighters of Bengal such as Netaji Subhas Chandra Bose, Aurobindo Ghosh, Rash Behari Bose, Deshbandhu Chitta Ranjan Das, Benoy-Badal-Dinesh (Benoy Basu, Badal Gupta and Dinesh Gupta) should get some place. (IANS)