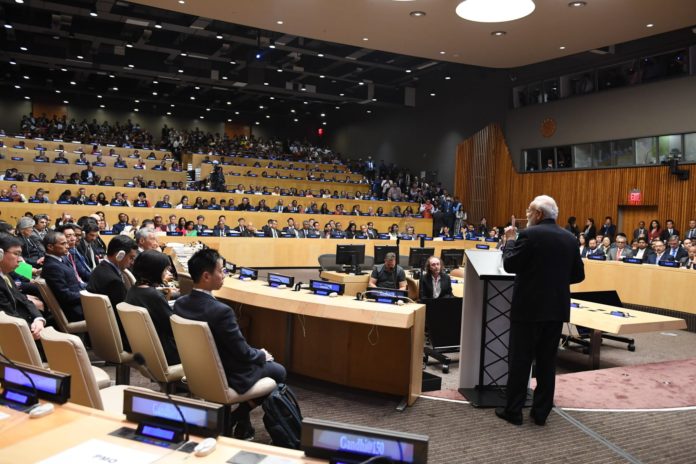 The Prime Minister made the announcement of the coalition on Monday at the Climate Action Summit, which was witnessed by global leaders, government functionaries, international delegates and diplomats from across the world, the statement said.

“India is launching a Coalition for Disaster Resilient Infrastructure. I invite all member states to join this coalition,” Modi said.

Developed through consultations with more than 35 countries, the CDRI envisions to enable measurable reduction in infrastructure losses from disasters, including extreme climate events.

“CDRI thus aims to enable the achievement of objectives of expanding universal access to basic services and enabling prosperity as enshrined in the sustainable development goals, while also working at the intersection of the Sendai Framework for Disaster Risk Reduction and the Paris Climate Agreement,” the statement said.

Established as a platform for generating and exchanging knowledge, the statement said, the CDRI will conduct country-specific and global activities.

“CDRI will provide member countries technical support and capacity development, research and knowledge management, and advocacy and partnerships to facilitate and encourage investment in disaster resilient infrastructure systems,” it said.

“Within two-three years, the coalition aims to have a three-fold impact of achieving considerable changes in member countries’ policy frameworks, future infrastructure investments and high reduction in economic losses from climate-related events and natural disasters across sectors.

“CDRI will uphold the UN Agenda 2030 principle of leaving no one, no place and no ecosystem behind, focusing on the most vulnerable regions and populations, while enabling inclusive and deliberative processes that recognise national and local efforts as primal,” the statement said.

An event is also being co-hosted by the Government of India and the United Nations Office for Disaster Risk Reduction (UNDRR) on September 25 on the sidelines of the SDG Summit to further deliberate on the significance of investing in resilient infrastructure to achieve climate and development goals.

The event is expected to be addressed by eminent world leaders and dignitaries, including Prime Minister of Fiji Frank Bainimarama; Minister for Environment, Forest and Climate Change Prakash Javadekar; Special Representative of the UN Secretary General for Disaster Risk Reduction Mami Mizutori; and Secretary of State for International Development, UK, Alok Sharma. (IANS)