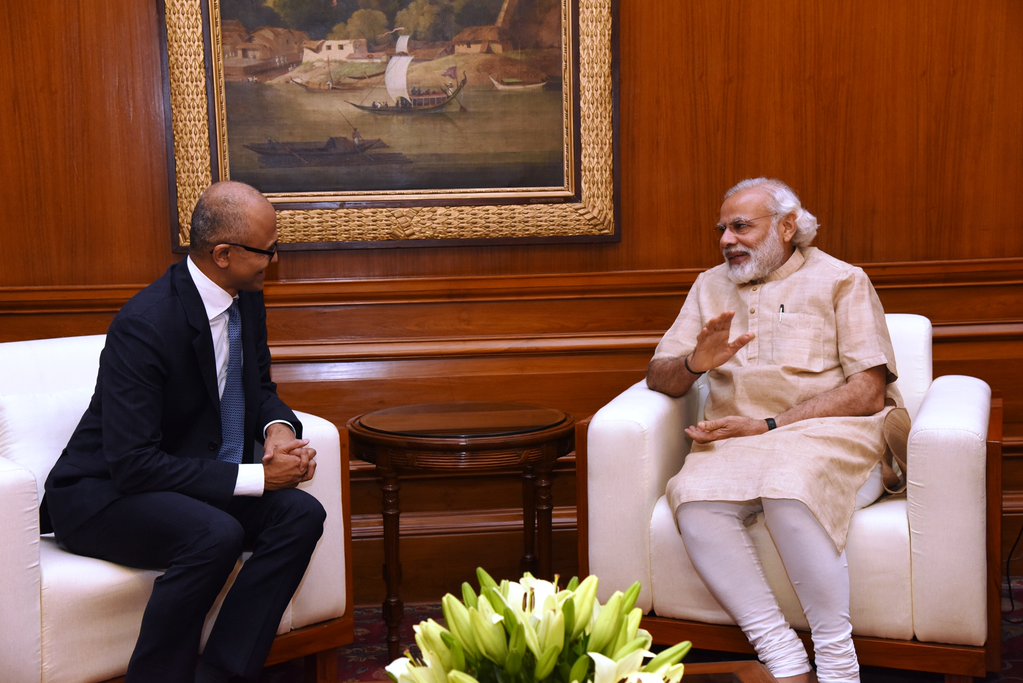 New Delhi– Microsoft’s focus on India is to empower every citizen and organisation so that they can perform better than their potential and achieve more for themselves and the country, the US giant’s chief executive Satya Nadella said here on Monday.

“It’s such an immense pleasure for me to be here in India and to see the energy, the creativity of this place. It’s infectious really for me, and, obviously I grew up here and I come back here often, but every time I come back, I go back energized and it’s phenomenal. It’s important to dream big and create big,” said Nadella, who is on his third visit to India since assuming charge as Microsoft CEO.

He was addressing the ‘Technology for good, Ideas for India’ conference organised by Microsoft.

“In my life there have been two passions that have driven at least my dreams, and I think back and one of the catalyst — it’s poetry and computer science,” said the India-born Nadella, who started his speech quoting Mirza Ghalib, the noted Urdu and Persian poet of the 19th century.

He met developers, as also entrepreneurs and students before the event.

Minister of State for Finance Jayant Sinha, who was also present at the event, said “Microsoft is a platform for India’s growth”.

Looking at Nadella, the minister added: “India can be an entrepreneurship engine. The kind of innovation you do in Seattle, New York, London and other places will not work in Jhanda Chowk in Hazaribagh (a constituency represented by Sinha). We need to innovate in India, for India.”

Among the young developers who Nadella met was also an eight-year-old boy who created a game trying to balance economic growth with environmental sustainability.

“To me, this idea of conversations-as-a-platform is a pretty transformative change in computing that I think we’re in the very early stages of. And I can’t wait to see what you all create on top of this platform in terms of changing how people experience computing,” he added.

“And the reason I invoke this rich canvas is to really invoke your ambition to how you will shape the world.”

He spoke about three platforms that Microsoft is creating. “The intelligent cloud platform that gives every application cognition and computational resources so that you can do anything; this idea of reinventing productivity and business process, how you interface with every institution and every process becomes much more natural to a conversation because of the bots you build, because the applications that you build have language understanding; and lastly, the apps that you build, the experiences you build for mixed reality.”

However, analysts are yet to figure out a clear roadmap from Microsoft regarding empowering Indian citizens.

“We are yet to see a clear future roadmap from Microsoft on how to empower every Indian citizen. I think Nadella, coming on the heels of Apple CEO Tim Cook’s India visit, must send out a clear message on the future of consumer and enterprise cloud and Windows 10 phones growth in India,” Vishal Tripathi, research director at global market consultancy firm Gartner, told IANS.