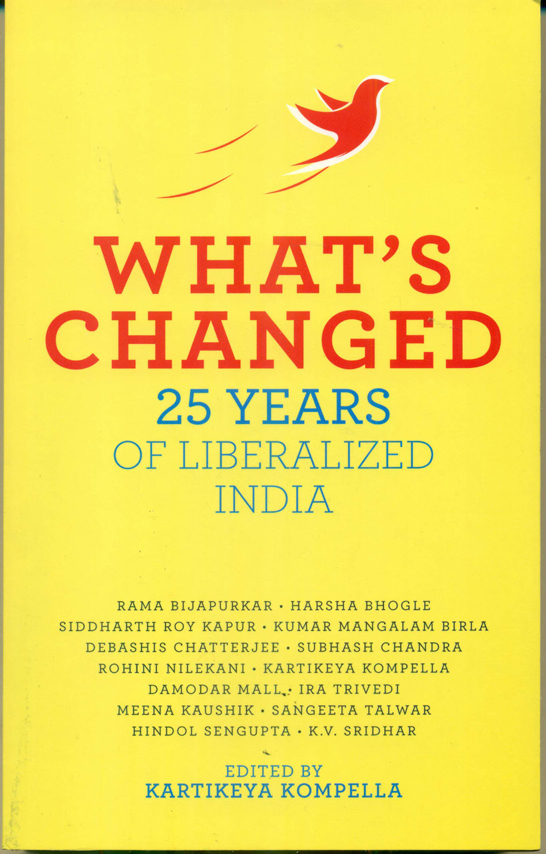 “In 2010, the most searched ‘how to’ on Google India was ‘how to get pregnant’. In 2008 and 2010, the second ranked ‘how to’ was ‘how to kiss’. Progress? It contains the silent anxiousness, unhappiness even, of women who want to get pregnant but are unable to, and probably find it difficult to talk about. These are symbols of yearning, lust, innocence, aspiration, acceptance, stress, commerce and striving all on display. It reflects the modern outlook of ‘Googling’ to learn.”

This interesting introduction to the book speaks volumes of the Indian values in transition. The book offers this and much more, intermingled with interesting anecdotes of the young refreshed urban India in stark contrast to the old-time stories of pre-liberalised era.

As the title suggests, it marks 1991, the year of liberalisation, as a watershed for India and tries to understand and explain what’s changed.

The journey of the last 25 years acknowledges the rise of Sachin Tendulkar, the image of the anti-hero getting popular Bollywood, a deluge of K serials, Tehelka’s news-making exposures on corruption – and much more – through the eyes of many known and famous people in their respective fields.

Here are some gems from the book:

Subhash Chandra (Chairman of Zee and Essel Group): “Zee TV carries the proud tag of being the pioneer of home-grown TV formats like Sa Re Ga Ma Pa and Antakshari way back in 1995.”

Siddharth Roy Kapur (MD and CEO of Disney India): “One of the key perspectives that has changed about film-making in India is that it is no longer only about a big Friday.”

Kumar Mangalam Birla (Chairman of the Aditya Birla Group): “In virtually one swoop, the legacy of socialism, and a command and control economy were thrown overboard. It was for the first time that Indian entrepreneurs could breathe freely.”

Harsha Bhogle (Cricket commentator): “It was bizarre, but in those days Doordarshan actually charged BCCI for telecasting matches!”

Ram Bijapurkar (Indian management and market research consultant): “‘Globalisation’ is not a nuclear bomb that flattens everything it falls on to identical rubble and then rebuilds it to a standardised design.”

Ira Trivedi (Indian novelist, yoga teacher, speaker): “Sex is finally out of the closet and is on the streets.”

Damodar Mall (CEO of Reliance Retail): “Reena’s childhood was deprived of choice. But her children’s lives are different. They have no idea what she’s talking about when she describes her experience of standing in a kirana shop to buy groceries.”

Kartikeya Kompella (Editor of the book): “Brands did exist and some very revered ones at that, ‘Surf ki kharidari mein hi samajhdari hai’ was a byword among housewives just as a Bajaj scooter was a prized possession.”

Debashis Chatterjee (ex-director of IIM Kozhikode): “If you were born in an educated middle-class Indian family you had to either become an engineer or a doctor right after school.”

Hindol Sengupta (journalist, writer and entrepreneur): “When the doors of liberalisation opened, we stretched our civilisational illiteracy to imagining that all that came branded from the West would make us modern.”

The book however does not intend to impart knowledge or preach, it just intends to remind you of the happenings that we have already lived through. Reading through the chapters, it compels you to pause for a minute and reminisce: “Ya, this is the way it used to be” and even makes you nostalgic but in a pleasing way.

The book honestly makes you go through the good and bad turn of events. It is not judgmental but candidly spells out how India has shaped out. It is not preachy, but still makes the reader ponder at various points whether “what’s changed” has been towards growth. Especially, at a point, where it reminds you of the 2012 gang-rape of a physiotherapy intern.

“A twenty-one-year-old girl was raped on a moving bus so violently that her intestines were lodged out, and she eventually died.”

But the book also abounds in anecdotes that put a smile on your face like when it refers to the increasing self-consciousness amongst the men with changing times.

“Wealthy men could go to Kaya Skin Clinic and the like, while the less wealthy chose other grooming products like Fair and Handsome and Nivea.”

Overall, it is a good read, for people looking for a light and jovial book. So, read it for the fun of it, to re-live what you have actually lived through.

“To make it relevant to everyone the book looks at aspects that form a part of everyday life and how they’ve changed,” Kompella told IANS.