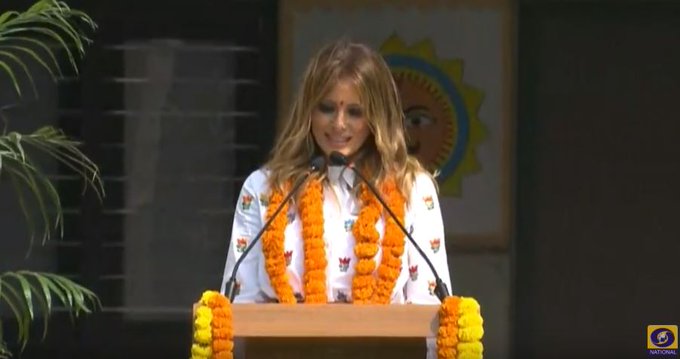 “I cannot think of a better way for all of us to start our day than this,” the First Lady said after witnessing the curriculum. She said that she was “inspired” by the happiness curriculum.

She advised students to be “good to each other” through their life and thanked the teachers for inculcating good values in them.

The US earlier on Sunday said that the political controversy around First Lady Melania Trump visiting a Delhi school was baseless.

After the ruling party in Delhi — the Aam Aadmi Party (AAP) cried foul after the names of Delhi Chief Minister Arvind Kejriwal and his deputy Manish Sisodia were dropped from Melania Trump’s visit to a school which runs Delhi government’s ‘happiness curriculum, the US embassy in New Delhi said, that while it “had no objection to the presence of the chief minister and deputy chief minister, we appreciate their recognition that this is not a political event.” A spokesperson for the embassy said that “it is best to ensure focus is on education, school and students.”

Slovenian-born model-turned-social activist, Melania, 50, moved to the US in 1996 and is the only First Lady to become a naturalized US citizen. Mother of Barron Trump, Melania spends a lot of her time on her campaign against drug abuse and for the well-being of children.

Following the major mass shootings at Las Vegas and Parkland, Melania along with President Trump visited the victims and their families. On her foreign trips, she often visits hospitals and schools. (IANS)